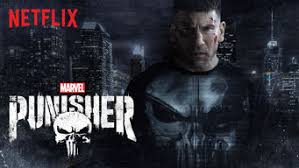 If you’re looking for a new Netflix show to start, Season 2 for The Punisher just came out. This particular show contains more action than other Marvel tv shows. The Punisher is a violent but interesting tv. The main character is Frank Castle. Frank is an ex-marine whose family is killed right in front of him. Frank soon goes in a killing spree, killing all the people that are connected to his family’s murder.

Season 2 is after Frank has solved the mystery of his family’s murder, and it goes into a deeper story showing how Frank was a good father. There is a girl that is in trouble, Frank sees this as an opportunity to start to act like a true father and take care of a little girl.

Probably the best scene in the season is when Castle walks in a gym where there are a dozen of muscular men. Frank is there to get the men to back off the girl. A huge fight starts to escalate and Frank takes them and beats them all. This particular scene is great because it has action and it shows that Frank has a lot determination to protect the girl.

The action in the series is sometimes graphic, but not too much, because it happens in the real world and that’s the fact on why it is so interesting. This show keeps you in the action and makes you wonder what’s going to happen next.

The Punisher contains all kinds of emotions that a tv show should have: sadness, excitement and gives you a “what’s going to happen next” feeling. It shows that even though some people do bad stuff that they have feelings as well, and they’re trying to help other people. This is a show that you should watch if you’re into violent/mystery type of plot.