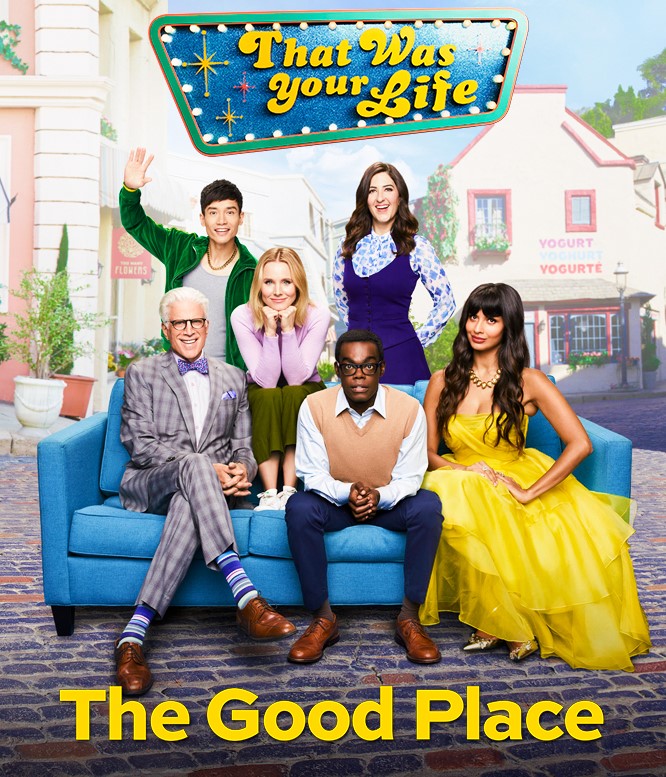 January 30 marked the end of an epic four season journey through laughs, philosophy, and romance; The Good Place aired its final episode. Attention: Spoiler alerts ahead.

From the first episode, The Good Place, clearly stood out as an exceptional show, and four seasons later, my opinion has not changed. The plot is genius, with major twists that keep the show fresh and new, but still sticking with the original feel. From the end of the first season, when it is revealed that when the four humans, Eleanor (Kristen Bell), Chidi (William Jackson Harper), Tahani (Jameela Jamil), and Jason (Manny Jacinto), thought they were in heaven, they were truly being tortured, and the end of the second season when they were brought back to life, the writers found ways to keep the audience engaged and excited.

The fourth and last season is no different. Eleanor becomes the architect for the afterlife test which determines whether the afterlife system should be changed, with one of her test subjects being Chidi. After the test, the humans, along with Michael (Ted Danson) and Janet (D’Arcy Carden), fix the afterlife.

In the finale, titled, ‘Whenever You’re Ready,’ all of the characters’ plotlines are wrapped up, and while tears were definitely shed, it was a satisfying and heart-warming conclusion. My main issue with the finale was the feeling that it was a little rushed, despite it being an hour long, while most episodes were about twenty minutes. It skips some moments people have been waiting for, including whether Chidi and Eleanor get married. It is also a little unclear if people get all of their memories back once they make it into the Good Place. Overall, though, the story is still marvelous.

Besides the stunning plot, the performances also make the show worthwhile. All of the actors’ portrayals both contrast and blend in ways that makes the plot believable. The script itself is also very good, as the writers make it very funny, without feeling like the jokes are just shoved in. They also included many nods to the first season, bringing the show full circle. On Earth, Michael finally gets a grocery store rewards card, which he wished for first season, as well as telling someone to, “Take it sleazy.”

The Good Place also addresses some interesting moral dilemmas, including what it is to be ‘good,’ and the meaning of life itself. In answering these questions, it doesn’t necessarily say what is ‘right,’ but makes us think about possible answers, as well. At times it can seem a little overwhelming, but it is not so much so that it is unwatchable.

The Good Place is a must-watch, and while it is now over, I hope that TV can follow its example in creating stunning shows.