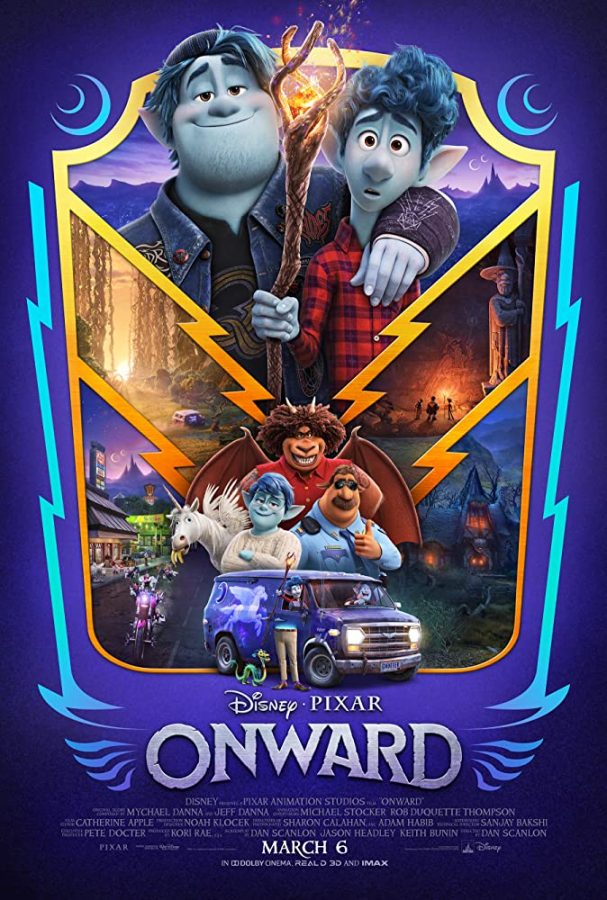 While stuck in quarantine, you can still go on an exciting adventure with the whole family with Pixar’s latest animated film, Onward.

Onward takes place in a modern fantasy world where magic has become outdated compared to technology. Brothers Ian (Tom Holland) and Barley Lightfoot (Chris Pratt) go on a quest to meet their deceased father, after failing to cast a spell to bring him back correctly and only bringing back his legs.

Barley guides them, using his knowledge from his role-playing game that is a direct equivalent to Dungeons and Dragons. Along their journey, Ian learns to use magic, discovers the importance of family, and conquers his fears. Working to help them is their mother, Laurel (Julia Louis-Dreyfus), and the Manticore (Octavia Spencer).

The animators did a great job. There is incredible attention to detail, so that even after rewatching it I noticed new things, such as background characters’ actions that shape the tone of different scenes. All the thought put into the entire world the movie takes place in more enveloping, outside of the main plot. The characters are created so that their emotions and personality are clear, not just from their facial expressions and dialogue, but also their entire body.

Pixar’s distinctive animation style combined with the talented voice actors makes the story believable, despite the unusual setting. Although the movie’s basic plot is a common trope, unlikely heroes going on a noble quest, the writers (Dan Scanlon, Keith Bunin, and Jason Headley) take twists on it to invest in you in the plot and the characters. To back it all up is a great soundtrack by Jeff and Michael Danna.

Besides just being about an adventure, the story is also symbolic about conquering fears and growing up, and carries the message of the importance of family. At the beginning of the story, Ian is lonely and unsure of himself, but throughout the movie, he conquers challenges that teach him to trust himself and appreciate what he’s got. It has good messages for everyone, and could hold a different meaning for different people.

While I was initially worried the plots might be male-heavy, with both protagonists being males and the females only playing supporting roles, I was quickly relieved, as Laurel and the Manticore proved themselves to be worthy heroes, and, Laurel especially, defied stereotypes.

The only thing I was a little disappointed about was a slight misrepresentation of high school. The depiction is a little oversimplified, as high schoolers face challenges outside of just insecurity, and most things can’t just be solved by confidence. It doesn’t take away from the whole movie, though, as only a small portion of the movie is about school.

Overall, Onward is a great movie for everyone, so next time you’re hanging around the house, watch Onward and invite the whole family.

It is available for free with a Disney+ subscription, or you can rent or buy it from various streaming services for $4.99.