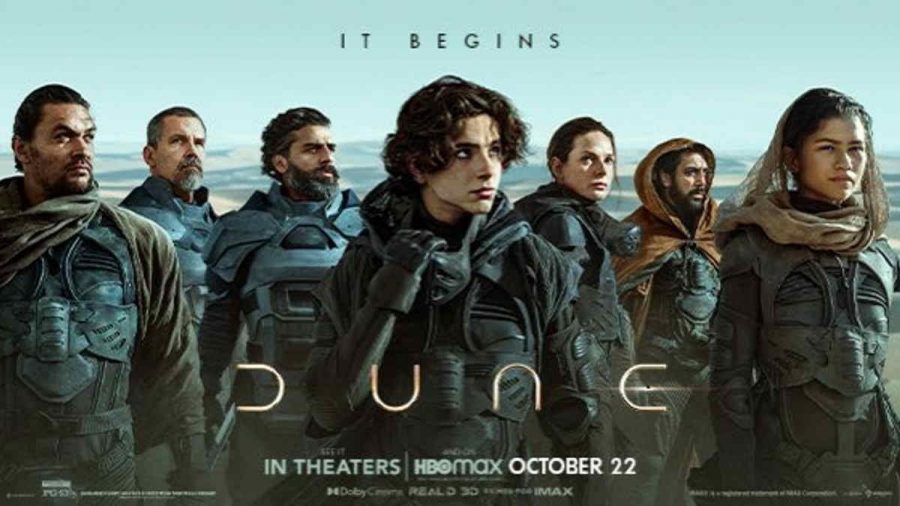 If you were expecting Dune to be the next Star Wars, you will surely be disappointed. If you switch up your expectations before watching it, you might come to enjoy the movie.

Dune follows the story of Paul Atreides (Timothee Chalamet), son of the Red Duke, Leto I Atreides (Oscar Isaac). Paul leaves his home planet, Caladan, and accompanies his father and mother, Lady Jessica (Rebecca Ferguson), to Arrakis, the only planet where the drug spice can be found. Previously, the Baron Harkonnen (Stellan Skarsgard) controlled the spice collection on Arrakis and subjugated the native Freman population.  Meanwhile, Paul has visions of a Fremen girl who lives on Dune, Chani (Zendaya). The Baron continues to scheme as Paul and his father make their way to his lands.

While watching Dune, the beautiful scenery and settings really stood out. Paul’s home planet, Caladan, was filmed in Stadlandet,Norway. Caladan is a dark and gloomy land where rain is very common. The grounds are covered in rivers and mountains. Caladan has high jagged rocks surrounding its beaches. The castle is an ancient structure, made of old stone and wood, and is distinguishable by its many rooms and halls. Castle Caladan is surrounded by a great river and farmland. Arrakis, the planet piled with spice, was filmed in Rub’Al Khali, a desert in Abu Dhabi, the capital of the UAE. Arrakis is a very difficult planet to live on with its heated sand and sandworms. Arrakis consists almost entirely of dry dune deserts, which leads to the planet’s alternative name, Dune.

From its promotion, Dune appeared to be an action-packed film, and it is, though viewers probably kept waiting for something bigger to happen. There is never a major event or twist in the plot that occurred. The end of the movie is so frustrating that no one will be able to resist watching the sequel.

Because Chani is on the cover of the movie, one would assume that she is included more than she actually is. Instead, she appears for only about 7 minutes of the 2.5 hour movie, seen in dream sequences and only introduced at the end. There is no character development for her because of her very limited role. Chani’s limited role was probably enough to hook you to watch the sequel in two years.

Though Chani wasn’t included much, the amount Paul’s mother, Lady Jessica, is included surprised me. Lady Jessica is part of the sisterhood known as the Bene Gesserit. She is able to weaponize her voice through “the voice”. The voice allows the user to control their victims through their words.

Overall, you should watch Dune because of its amazing scenery, its fast pace that won’t leave you bored, and its suspenseful nature that will keep you waiting for the next scene.

Dune shows a beautiful setting in both the planets Caladan and Arrakis. The movie is fast-paced and one event follows the next very closely. Similar to many other science fiction movies, Dune has many worlds, planets, and groups of people that keep you engaged throughout the entire movie.

Dune premiered in movie theatres on Oct. 21, and is currently available to stream on HBO Max until Nov. 22. Dune: Part Two is expected to be released on Oct. 20, 2023.