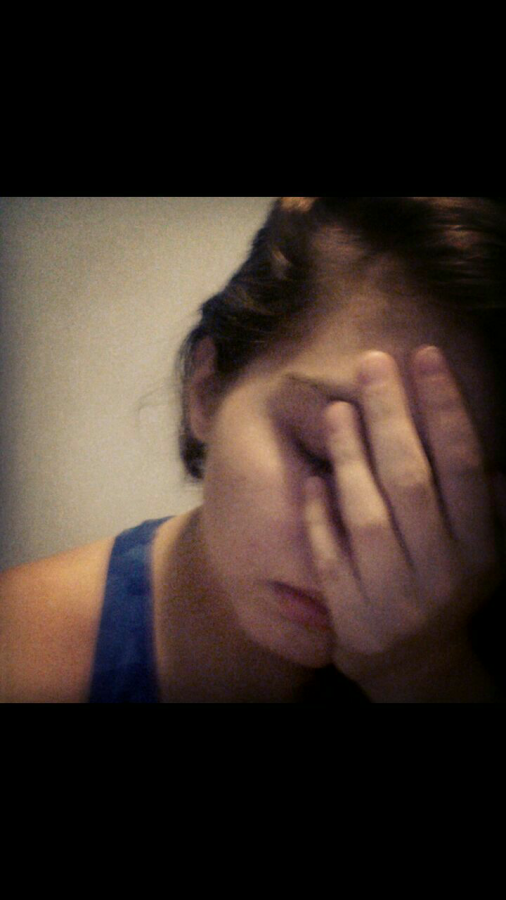 Sophomore Taylor Holt took a picture of herself while having a panic attack.

Everyone has had butterflies in their stomachs before a major test, but nausea, shortness of breath, and a rapid heartbeat? These are all symptoms of anxiety disorder, a problem that many teenagers are facing.

In the United States, about 25 percent of kids 13-18 will experience an anxiety disorder and 5.9 percent have a severe disorder, according to a study from the National Institute of Mental Health. Girls are about two times as likely to be diagnosed with a mood disorder than boys.

“Anxiety, for me, is normally an overwhelming sense of lightheadedness and shakiness,” sophomore Taylor Holt said.

Holt’s anxiety comes from dealing with post-concussion syndrome. While playing soccer in middle school, Holt had five concussions, the worst from when another player repeatedly kicked her in the head.  The incident did permanent nerve damage to her brain as well as giving her Post Traumatic Stress Disorder (PTSD).

“When I start getting anxious at night I tend to not get much sleep and, with school on top of that, things get hard,” Holt said.

She has recently started going to a therapist who taught to find her happy place and to try her best to calm down. She will also sit in a darkened room and try to breathe correctly.

While PTSD-related anxiety is usually linked with a specific event, general anxiety and social anxiety are a bit harder to pinpoint.

Junior Ashley Divine has recently discovered that she has an anxiety disorder. She get anxious when she has due dates and tests and gets most anxious during exam weeks and at the end of the year.

Divine didn’t know she had anxiety until a few incidents of severe lightheadedness sent her to the doctor. “If you think it [anxiety] is a problem, go and get medication or advice on how to cope and get better.”

Only about 18 percent of adolescents with an anxiety disorder received any mental health care, according to the National Institute of Mental Health.

Currently Divine doesn’t take any medication for her anxiety. Her doctor did recommend breathing exercises and just relaxing. Divine works on just relaxing and partaking in activities that are distracting.

School can cause anxiety for many reasons including deadlines, balancing problems and assignments.

According to guidance counselor Jamie Sherwell,“A certain amount of anxiety is good and can be productive, but some anxiety is nonproductive.”

While anxiety can be used to an advantage like getting school work done but, it can also lead to getting nothing done, such as just worrying about the problem or situation instead of actually doing something about it.

Some teens may cope with their anxiety through drinking and drug abuse. Although it’s unhealthy, some teens feel like there is no other escape.

Adolescent psychologist Dr. Lisa Locke-Downer recommends fun activities such as hanging with friends, listening to music, and things that help you calm down.

Locke-Downer encourages talking to help, whether it’s to family, friends or a therapist.

Other ways to help control anxiety involve self-care, such as eating correctly, getting enough sleep and exercise. Also lighting a lavender candle or eating certain vitamins can help, according to Locke-Downer.

Talking about problems with anxiety is now less taboo, and guidance counselors want students to know they are available. “It’s important for anyone to know if they want to talk about it there are people who will listen,” Sherwell said. “You’re going to be okay.”

“I know my situation isn’t the best, but I have to make do with what I have,” Holt said.

If you or someone you know is experiencing anxiety, you can talk to a guidance counselor or contact the local teen crisis hotline 24 hours a day: 434-972-7233.