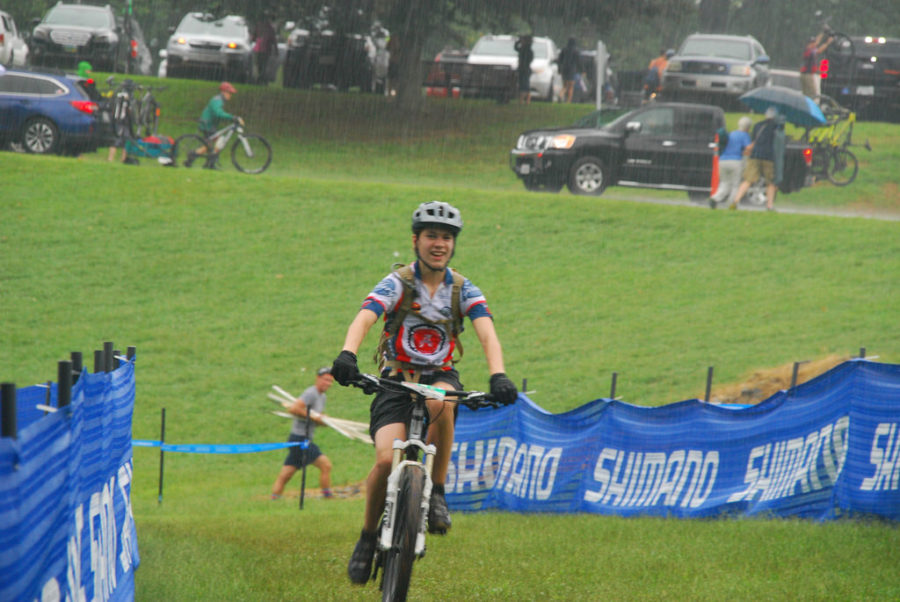 The sound of an announcer roaring out names, screeching and scraping of bikes on gravel, not being able to move due to the fact that there’s barely an inch of space between each person; these are pretty commonplace during mountain bike races.

This is the start of the second year for the AHS mountain biking team, which consists of about 30 members.

There are four races in the season, and the first one takes place at the Jouett Middle School, then at Stokesville, eventually continuing onto Woodberry Forest, and the last race took place at Bedford last weekend. There are over 150 people in the varsity race and about 70 in JV. The bikers line up in lines in of five, with five people in a row, then five more behind them, and so on. Once everyone is lined up, a horn gets blown and the race starts.

Racers aren’t required to have the same bike.  For example, Price has a Trek with bigger wheels in the front for suspension whereas junior Sam Knotts has a hardtail, which means he has front shock suspension in the front none in the back, meaning his front wheels can absorb impact in the front way better than the back wheels can.

People can also modify their bikes, but there can’t be any ridiculous advantages, like making your bike electric.

“Modifying bikes is more for suiting how you ride. Varsity mods their bikes more. You can be a bad rider on a good bike, or you can be a good rider on a bad bike,” Knotts said. “If you really want a boost [in performance], then you need to boost yourself. Even if you have have an $8,000 bike and you suck you’re just still gonna be trash.”

Obviously, during their practice, the team will need their own bikes. Once everyone has brought their bikes from home and shown up, the coaches will talk to them for a bit, then they break up into groups based on how fast they are. After that, most of the practice is just riding and building up endurance. According to junior Connor Smiley, practice can have from eight to ten miles of riding.

The team often practices at Brodie Creek, but can also be found at Observatory Hill (O-Hill), Forest Lakes, really anywhere that has a hill. Practices are on Tuesdays and Thursdays, plus a weekend practice.

“During practice someone always gets hurt,” Price said.  During practice recently, someone crashed and ended up getting a concussion, and won’t be able to practice for another week.

Knotts had a close call during the race at Jouett, describing it as, “Almost dying.”

“One of the varsity people pulled up on me, then my brakes locked up and I almost crashed into a tree. I ended up placing 50th.” Still, Knotts hopped up on his bike and kept going.

When you think of mountain biking, you don’t really think of people working together. Maybe two friends going down a trail or road, but definitely not huge groups of people racing each other.

“It’s very individual, we don’t really work as a team during the race. We stay with other people but you do everything by yourself- it’s not like you’re passing to anyone, or trying to help anyone out. And during races you get a team score (based on overall ranking), not a solo,” Price said.

“We have a good team atmosphere. A lot of riders from the other schools are jerks, but AHS is a lot more kind,” Knotts said. “We’re not gonna insult the freshmen who falls off his handlebars, we’re gonna help him up, even though we’ll call him a nerd at first.”