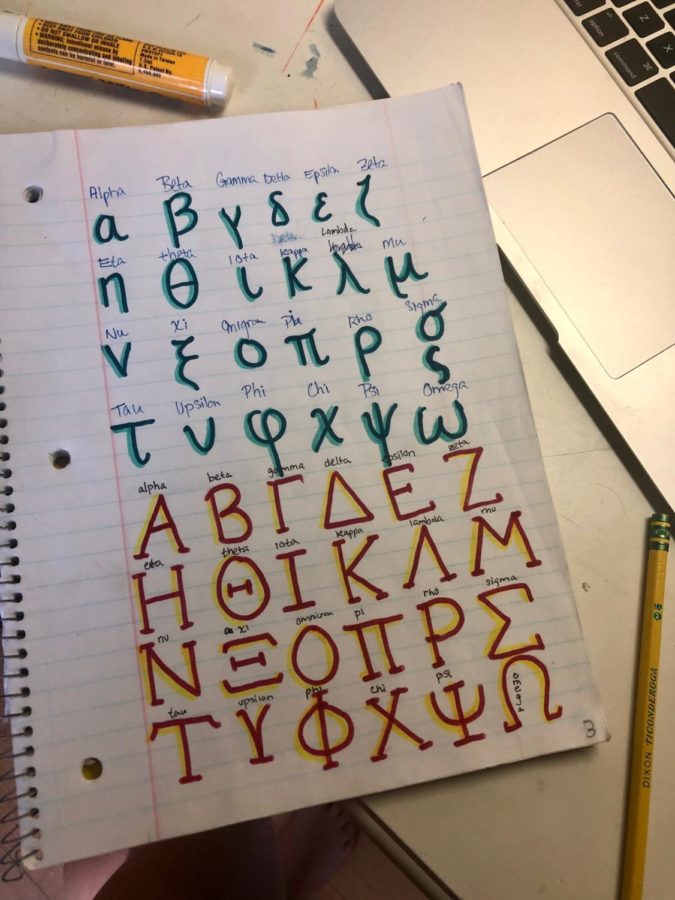 The students in Ancient Greek must learn the unique Greek alphabet. It is the only language at AHS that has an entirely different alphabet.

The oldest language taught at Albemarle High School is also the newest class being offered.

Starting in the first semester, an Ancient Greek class made its debut at Albemarle High School with 21 students.

The course goes over the Ancient Greek language, starting with it’s unique alphabet before delving into how to translate words and sentences into English. The course also goes in depth into the culture of Ancient Greece.

It’s kind of mind blowing when you talk about the drama, the epic, the philosophy, how they laid the foundation and built this incredible basis for our civilization and for western culture in general. What I want to get across to students are just these incredible gifts that they have given and how we don’t even know it.”

In each of the three units, Clay incorporated various activities in order to get his message across. The students read relevant material, such as the Iliad for the epics unit. At the end of every unit, a guest speaker who specializes in the focus comes to the class to provide a change of pace.

One of the students in the class, sophomore Isabella Sonen, took away this new understanding of ancient Greek culture and its modern influence.

“I would recommend the class to others,” Sonen says, “not because I plan on speaking ancient Greek at some point in the near future, but because it was a really cool way to explore a different culture with a really helpful teacher. I feel like I took away a more worldly approach to learning and got a better understanding of the makings of civilization.”

Not only does the class aim to increase understanding of Greek culture and its influence in the modern world, but it also helps when learning other languages.

“Greek is very logical, it’s very structured, and training your brain in that way is extremely helpful,” Clay says. “It makes learning another language easier because you have a foundation for how a language will work.”

Sonen says she took away a better understanding of languages. Already having taken Spanish and German, she said it had a lot of similarities to them, and it helped her to better understand grammar.

Both Jackson and Sonen say that, while the course provided a challenge, it was still “lighthearted and fun.”

“I took away an increased love of classics and interest in both Greek and language learning in general,” Jackson said.

Sonen echoed this, saying, “it’s impacted a bunch of different areas of my life and allowed me to contribute to all sorts of intellectual conversations.”

In the end, Clay says that these takeaways are his goals for his students.

“What I want to get across to students are just these incredible gifts that they have given, and how we don’t even know it.”

Ancient Greek will be offered again next year. It requires no prerequisites, although people who have taken it typically have a background in another foreign language. It does not count as a language credit. Instead, it counts as an elective credit.

“Greek will give you an appreciation for things in your life that you take for granted,” Clay said, “and it will continue to do so for the rest of your life.”