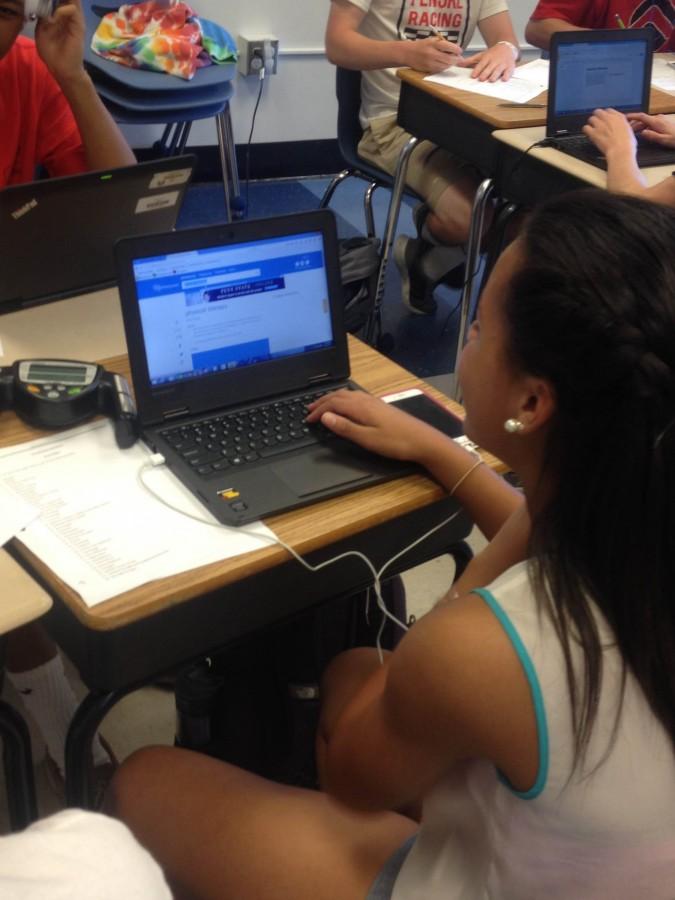 Freshman Kayla Mann uses her laptop to make a training brochure in her Sports Medicine class.

“Being able to proficiently navigate in the digital world is every bit as important today as in the physical world,” Chief Information Officer of Albemarle County Public Schools Vincent Scheivert said.

ACPS implemented a One-to-One program this year for current freshmen. This program provided students with Lenovo laptops loaded with an Adobe Suite and Microsoft Office as well as the ability to check homework online.

“The devices are provided to students so that you can access content, each other, and the world,” Scheivert said. “These tools will allow you to accelerate obtaining lifelong learning competencies as defined by the school board.”

Freshmen seem to focus on the more immediate benefits of the laptops, using them for both scholarly and personal reasons.

“[The laptops] help me access my homework. If I miss a day I can check online to find makeup homework,” freshman Sadie Gilliam said. “[The teachers] are becoming more online-friendly.”

Some classes found a way to incorporate the new laptops into their typical curriculum beyond providing makeup homework.

“I upload photos to the Photoshop app to edit them for Photography,” Gilliam said.

Although the laptops have allowed for expansion in the classroom, there have been some minor problems.

“For ninety percent of my students, the one-to-one initiative went fine.  I think it worked the way the program was envisioned,” English teacher Teresa Tyler said. “The other ten percent caused immense frustration.  It was too much temptation and they couldn’t stay off of video games and other distractions.  Those students made it terrible.”

Student misbehavior didn’t cause all of the complications in the One-to-One program this year. Viruses, malware, and computer issues plagued freshmen and the help desk creating difficulties this school year.

Freshman Lara Dimsoski received a virus on her laptop resulting in a three-day period without access to the device, including homework, personal files and any documents saved to the laptop’s desktop, while it was repaired at the help desk located in the Media Center. However, the help desk hindered students in some cases.

“I had a 30 page document on [the computer] for a thing in English. [One day,] I turned the computer on and it showed this blue screen,” freshman Lily Casteen said. “[Later,] it wouldn’t turn back on so I took it to the library and they tried to fix it and when they gave it back to me the hard drive was wiped and everything was gone. [Ms. Reaser] gave me an alternate assignment because we couldn’t get it back but it was a month late.”

Computers taken to the Media Center are assigned a ticket detailing the issues which are then sent into the Department of Accountability, Research, and Technology (DART) system. Then the computer is taken to the IT department where the issue is resolved, usually between one day and one month, depending on the issue. After the computer issue is resolved, work study students deliver the laptops to students in their 3rd period class.

With issues such as Dimsoski’s, involving multiple days, the Media Center gives out loaner computers to replace the damaged laptop until it is repaired.

“We had on a daily basis about two to five students come in with computer issues that we would try and help out or write a ticket for,” Library Media Specialist Ray Chrobak said.

With a probable increase in technological issues given the increase in laptop users, the Media Center is planning a possible change in its help desk techniques.

“We are going to see about getting a student-run help desk going,” Chrobak said. “We will see if some students could possibly fix some of the minor issues without it going to the IT guy. That will be probably the only change.”

As a new program this year minor issues are expected; however, ACPS is working to fix those problems.

“At AHS, I would have loved to see the student help desk be more developed,” Scheivert said. “In a community of learners we all need to support each other.”

The freshmen received the laptops this year as a trial for next year where every student at Albemarle will receive a personal computer. Each laptop costs about $500 and, with just under 1,800 students at AHS, that totals around $895,500 to provide laptops. According Scheivert, the cost of the laptops does not increase operational spending by ACPS from previous years.

“I think that some students will be given the big old computers off the computer carts, making it not very convenient for them.  I think it might be better if everyone had the same kind of computer,” Tyler said.

“Our current ninth graders, so next year’s tenth graders, will be issued their laptops from this year,” Assistant Principal Melissa Hankins said. “Beyond that, there will be a redistribution of previously used laptops for our eleventh and twelfth graders.”

The distribution of the laptops is contingent on when they will be ready for student use. Administration set up two plans for distribution either before school or during the first couple of days.

“Our tentative plan depends greatly on when the laptops are ready for distribution, as all laptops are re-imaged and updated over the summer,” Hankins said. “ If the laptops are ready before teachers return to school during what we call Pre-Service Week (the week before students return), we may offer some dates where students and parents can come to the school to submit their student-parent laptop agreement, sign the responsible use form, and pick up their assigned laptop before school begins.

We hope to distribute to the vast majority of students prior to school opening.  If this plan cannot be implemented, then, we will proceed to plan B which entails distribution during the school day in the initial days of school in August.”

The Responsible Use form referred to by Hankins can be found on the Digital Learning Site 1:1 on Albemarle’s homepage.

Forms must be signed and returned before students can receive their laptops during either Pre-Service Week or the first few days of school next year.