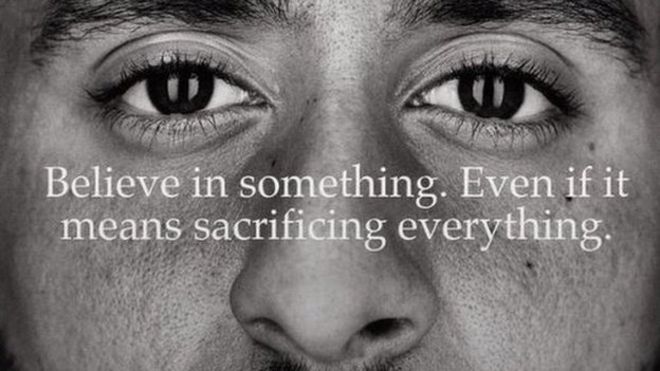 You’ve heard about Colin Kaepernick, right? Well, if you haven’t he’s the man that just got a whole lot of cool cash from his new Nike endorsement.

In 2016 Kaepernick began protesting police brutality by taking a knee during the national anthem. His protest started a backlash with the league,and after 16-17 season he was released to free agency and hasn’t played in a NFL game since.

On Sept. 3, Nike revealed Kaepernick as face of their campaign with the tagline, “Believe in something, Even if it means sacrificing everything.”

Now people are burning their Nike clothes and shoes because they don’t think that Nike should be supporting someone that “disrespects” the national anthem, but that’s not what he’s doing at all. I believe that what he doing is right, and I like how he’s doing it with no violence. He’s peacefully protesting the police brutality towards African-American citizens. Some people don’t think that there is police brutality, which, in my opinion, is just plain dumb.

Police brutality has been an issue in the United States for a long time. Racial minorities make up about 37 percent of the U.S. population. But 63 percent of unarmed people killed by police are minorities, according to a 2015 article in the Guardian. That means unarmed African-Americans are twice as likely to be killed by police.

President Donald Trump tweeted that Nike would get “killed” for signing an endorsement deal with Colin Kaepernick, but that isn’t the case. Nike’s market value has surged by nearly 6 billion dollars since the Colin Kaepernick signing, according to CBS News.

Using Kaepernick as the face of their campaign was a smart move on both parts. For Kaepernick, its a smart move because he’s not likely to play in the NFL again, but is still making the NFL money, and standing up for what he believes in. For Nike, their sales have reached an all time uprising, and there getting a lot of publicity for it.