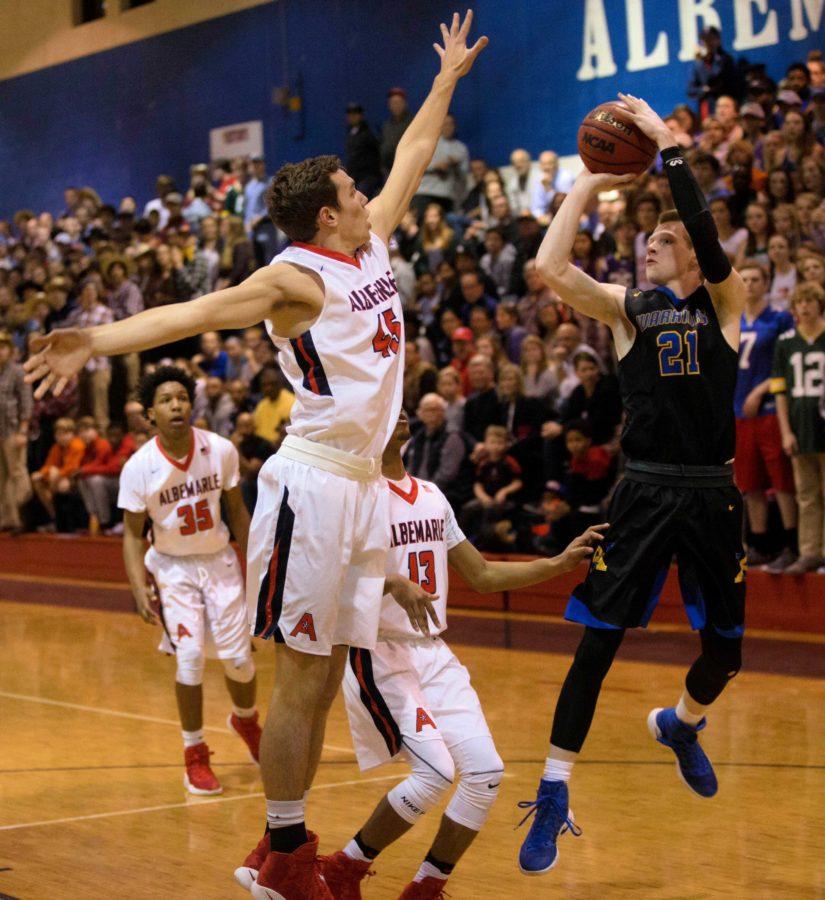 After a 2015-16 season that many pegged as the greatest season in the history of Albemarle Basketball, this year’s squad has exceeded even the most optimistic of expectations.
At this point last season, the Patriots were riding high heading into the tournament, but this year, AHS has been even better. The Patriots will close out the regular season with a 22-2 record, and a will walk into the postseason with a Jefferson District Title, and a championship in the Daily Progress Holiday Hoops Classic.
The Holiday Hoops Classic is an eight team, three day tournament that took place over the winter break. The Patriots defeated Fauquier in the quarterfinals, WAHS in the semifinals and West Potomac in the championship game.
“It’s a lot of fun, it gives us a good taste for what regional playoffs and states will be like,” senior forward Austin Katstra said. Katstra is Albemarle’s all-time leading scorer, and earned division 5A all-state honors last year.
During the Daily Progress tournament, Katstra led the Patriots in scoring, averaging 22 points per game during the three-day event, which earned him tournament MVP.
Katstra cited the added experience of the team to account for improvements, and added that as long as they work hard and put in the effort, the results will take care of themselves.
Senior Jake Hahn led the team in their deep run last year, and the forward has played well on the big stage this year as well. He came up with 18 points on the road against WAHS in the second of three meetings the two schools would have.One of just two losses on the Patriots’ resume this year came on Friday, Jan. 13 in a 64-60 home loss at the hands of the Warriors.
The Patriots had already beaten WAHS twice earlier in the season, so the cross-town rivals came in swinging. Seniors Ryan Ingram and Josh Coffman combined for 50 of WAHS’ 64 points, and it seemed as if every time AHS seemed to get something going offensively, the Warriors had an answer.
After the loss to WAHS, the Patriots slipped up just once more, being upset in a close loss to Granby. Despite the two losses, the team secured the winningest regular season in school history on Jan. 27 in a 69-45 win against Orange County High School.
AHS also will walk into Regionals with the Jefferson District conference title. AHS came into the tournament as the one seed, edged out Louisia in the Semifinals, and then cruised to a victory over CHS in the District finals.
Katstra came up with 21 points in the finals, and guard J’Quan Anderson scored 17 against the Black Knights. Anderson was also named to the Holiday Hoops all-tournament team, and was a key player throughout the season.
Including the victory over CHS in the District finals, the Patriots finish the year with a combined 8-1 record against the school’s three biggest rivals, WAHS, CHS, and MHS.
“[For rivalry games] we prepare the same, we obviously know there’s an added hype to it, but it’s just another game [and] we gotta do what we gotta do,” Katstra said.
The next step in the Patriots’ road to states came in the Conference 16 tournament, a six team tournament featuring some of the regions best schools. Albemarle recieved a bye in the first round, and destroyed Orange 100-53 in the semis. AHS then defeated Patrick Henry in the finals, giving the Patriots a first round bye for regionals, which will take place this week, with every game taking place here at Albemarle High School.
As of the time of writing, Albemarle’s possible opponents for the regional quarterfinals is not known, but we will know by late Monday night. The Patriots will then play in the regional quarterfinals on Tuesday, the semifinals on Thursday, and then the regional finals will be on Saturday.
If the Patriots make it, the state tournament will take place in early March on the 3rd, 4th, and 11th in Richmond, VA on the campus of VCU.