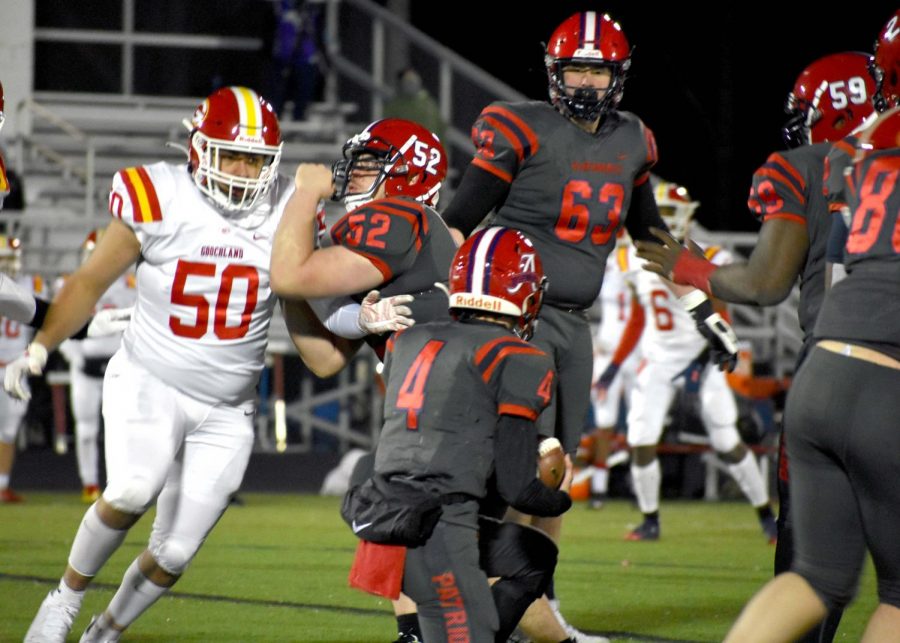 Freshman offensive lineman Tufan Khasanovich Khalilov works to block a Goochland player while junior quarterback Jake King looks for an opening. The Patriots failed to put up any points during the March 3 game.

This Friday the Albemarle Patriots take on the Charlottesville Black Knights in a pivotal game for a pair of young teams.

The Patriots come into the game at 2-2, against a Charlottesville team that’s still looking for its first win this season, as they sit at 0-5. With these crosstown rivals, be on the lookout for a close game.

Albemarle has beaten Fluvanna and Monticello, but they’re coming off a crushing 36-0 loss to rival Western Albemarle. To say their offense has struggled this year is an understatement, as they’ve put up just 13 points over the last 3 games.

They’ll look to get back to the ways they had in their season opener against Monticello, where their ground game came alive, highlighted by RB Ebenezer McCarthy’s 65 yard TD run. Coach Brandon Isiah will look to use McCarthy and get the ground game working against a porous CHS run defense. Although they had a rough go last week, the Patriots’ defense has been stellar at times, and that could be the difference in a close game.

The Black Knights are coming off their best offensive game all season, a three point loss to Monticello. Freshman RB Eddison Duolo ran for over 200+ yards and 3 TD’s against the Mustangs. It’ll be important for the Patriots to slow Duolo down early on, if he gets it going, he’ll be tough to stop. After a tough loss to Albemarle last year, Charlottesville should be extra motivated to get the win.

This is a basic match-up of specialties; Albemarle’s defense vs Charlottesville’s offense. It should come down to who can play better on the other side of the ball. In the battle of the weaknesses, Charlottesville has let up 36+ points twice this season, but Albemarle has shown they can score, and based on that, the Patriots should come out on top.