It shows its amazing skills at this place called the Pancake Rocks on the West Coast of the South Island. They call it the Pancake Rocks, because they are these limestone formations that began forming 30 million years ago, started with lime-rich fragments of dead marine creatures that were deposited on the seabed, then overlaid by weaker layers of soft mud and clay. 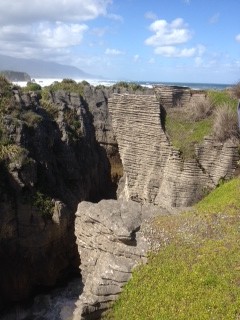 The seabed was raised above sea level by earthquakes to form the coastal cliffs and coastline. The sea, wind and rain etched out the soft layers to form the unusual rock formations that look like pancakes.

The Pancake Rocks are spread along the coastline and have a path running through them that’s about a fifteen minute walk. 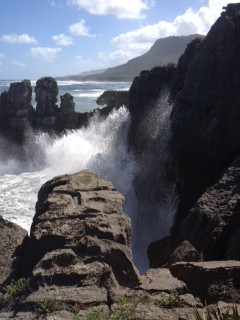 Amongst these incredible rock formations, are blowholes, which are water worn passages through which jets of sea water are forced upwards during high tide.

The Pancake Rocks are scattered around the coastline, like multiple stacks of pancakes, and in between the stacks, the blowholes were created. 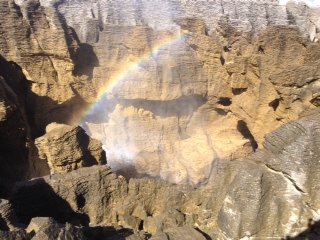 When I visited the rocks, I was lucky enough to catch a rainbow that the blowhole created.

There is a poem about the rocks titled: What do you see? that is written on a board on the pathway through the rocks:

The pancakes are slowly

By the wind, the rain

and the sea everyday.

Some strange folk are out there

too, having a feast

Creatures who come from

What’s that you say,

they aren’t really there?

Well, I sure can see them,

they’re ever so clear.

The kiwi’s definitely showcased the rocks beautifully, and the addition of this poem added to the effect of nature and man working together to create something truly enjoyable. 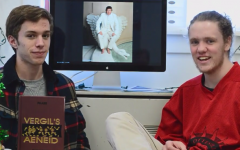 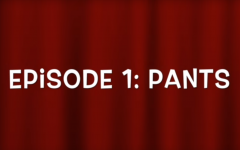