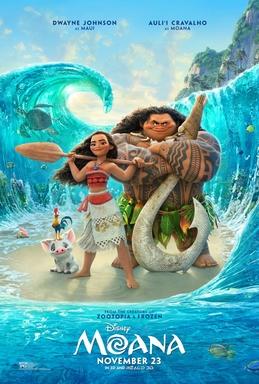 From the first trailers featuring the Rock’s comedy and Auli’i Cravalho’s charm to the theatres where the songwriting genius behind the Lion King and Hamilton shone through, Moana largely fulfilled its destiny to be Disney’s latest success.

Though not at the same level as Frozen’s Let it Go, the songs in Moana had strong Pacific island musical influences that melded well into the musical style of Disney. Some songs began in Polynesian, and the instrumentals caused tears at several points in the movie. Of course, with help from Lin-Manuel Miranda and Mark Mancina, the music was fated to unite old and new Disney ideas.

The characters were remarkable, featuring a independent female lead, Moana, who went on a quest not to find Prince Charming, but to save the island she was destined to rule. Maui was a multi-dimensional character, with flaws that are discovered and overcome throughout the movie. Of course, the half-witted chicken that was in the trailer was a constant comic relief, but the adorable pig also introduced was only in for a few scenes.

As far as accurately portraying the culture of Pacific Islanders, Disney has far outdone any previous endeavors. Is it a marketing ploy? Probably. Did the animators do their research? Yes. The story showcases many stories of Maui, a demigod from the Pacific islands, and realistic outfits and food from the area.

The weak point: the conclusion. Up until the conclusion, the plot built upon itself, increasing the risk and suspense with logical (for a Disney movie) consequences. Expecting more of a How to Train Your Dragon fire scene that ended in near death and a lost limb, the ending to this was much less satisfactory. Previous to this climactic let down, there was a touching moment when Moana decides not to give up that was much more emotionally moving than the real climax. It felt like that scene the real climax, and the rest of the movie that was supposed to continue that emotion was more of a resolution.

In summary, go see it. It’s emotional, the characters are endearing, the plot is deep enough to be entertaining and the music is not too annoying when it inevitably gets stuck in your head. Force a small child to watch it with you at the theater and hope not to be judged or something. It’s worth it.