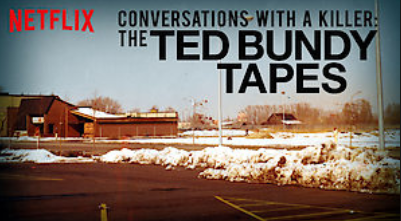 The newest documentary on Netflix adds a twisted sense of intrigue to its viewers.  Conversation with a Killer: The Ted Bundy Tapes looks into the Ted Bundy murders differently than any other articles or books have. It sets up a timeline, gives us insight on his life, and we learn more about his victims and their families.

The audio tapes were created while Bundy was on death row in the late 1980s. The young, inexperienced journalist Stephen Michaud interviewed the infamous Bundy in the hope of getting him to confess to the murders and for the people to get insight on the thoughts of a serial killer. Michaud wrote a book drawn from the 150 hour audio recordings, called Ted Bundy:Conversations with a killer.

The documentary features these tapes that have never been released to the public. They also feature people that knew Bundy throughout his life. His mother, his ex wife, different lawyers, journalists, childhood friends and even a survivor of his attempted attack.

The first episode had a slow progression  but I found it necessary. It started out from his childhood, young adult life, the court cases, and then life on death row. We get insight on how he was raised, how he perceived himself, and how onlookers perceived him.

The documentary also set up the episode format in a unique way. It told his life like a story and would, at some points, have him narrating from the tapes, pieced with interviews and footage of him. The way clips are put together in the form of a timeline makes the show flow easy for understanding.

This show isn’t something you can play in the background like Friends or The Office, you have to sit down and retain the information. If you can’t sit through the facts that are thrown at you, then this isn’t the show for you.  However, if you enjoy looking into murder cases and seeing how everything went down, then this is a great a show for you.

Recently there has been quite a controversy surrounding murder documentaries. Some people believe that these shows downplay the victims and glorify the killer. In the case of this show, it was not done in the documentary. I felt as if the show was trying to expose people like Bundy, charming and seemingly average, has an inflated sense of self and psychotic attributes. They talked about the victims and their families quite frequently, giving them moments for their families to voice their opinions on Bundy. I  think this show was a perfect blend of creepy, and empowerment.