A Little Laughter and a Little Tears 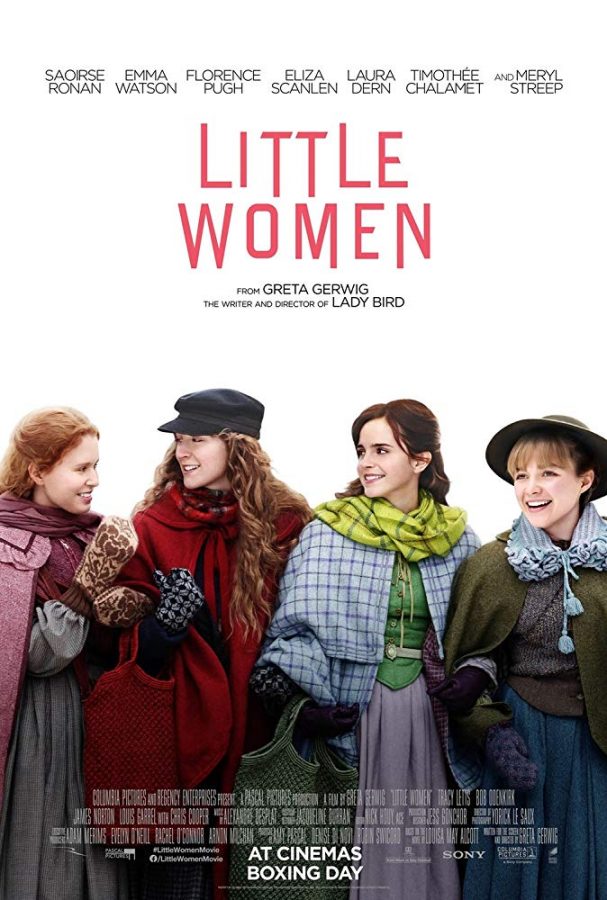 Jo March stands at a door gathering her thoughts before she turns the knob and enters a bustling office. She is there to talk with a newspaper editor and hopefully sell a story, one she claims is the work of her friend. Her inky fingers make it obvious that she is whom those pages belong to. To her surprise, after the editor is done commenting on her story, he agrees to publish her work. She leaves the office and runs through the shuffling gray of New York.

This scene starts director Greta Gerwig’s take on Louisa May Alcott’s novel, Little Women. The film follows a family of four girls in the years after the Civil War as they struggle for love, money, careers, and health. Jo March (Saoirse Ronan) lives in New York to pursue her love for writing. Her sister Amy (Florence Pugh) studies painting in Paris. The oldest of the sisters, Meg (Emma Watson), lives a more lavish life, going to balls in silky dresses with girls who can’t relate to her money struggles. She ultimately marries a school teacher who can’t afford to give her what she desires. Beth (Eliza Scanlen), the youngest and most shy, is a talented pianist who later in the story falls ill, another turn of events that brings their family together. Their wealthy neighbor Theodore (Timothee Chalamet) is a constant love interest in the plot. The storyline transitions from parts of their childhood to each of their lives in the future, mainly focusing on the ones where two or more characters’ paths cross.

Being able to see scenes from the sisters’ childhood teaches you how the characters acted when they were younger, and you can see the similarities come out in scenes from the future. Jo’s eagerness to chop her hair off to earn money and help her mom foreshadows her independence and thoughtfulness in making big decisions, which is later shown in her heartbreaking scene with Laurie. The plot helped keep you engaged throughout the scenes, but the acting done by the actors and actresses who embraced their role helped you feel the emotions of each character and understand them better. When Meg cries because of Laurie’s rude comments about her dress and desires, you see yourself pitying her and hating Laurie for making her feel that way. Seeings Beth in bed feeling ill makes you want to be there with her and comfort her. The success of this film came from the emotional plot points but also believable acting.

Although emotional and engaging, the transitions between different times in each character’s lives could have been more clear. The sudden changes in environment and people were difficult to follow until most of the scene had already played, when it became clear that the scene was either preceding or following the previous one, and not the same moment in time.

Once you get past the unclear transitions, the movie will make you deeply engaged as you watch the characters grow. Its outstanding costumes and captivating acting are just two reasons it is a strong film, and whether you have or haven’t read the original book, you should watch this Oscar-winning film.

A Little Laughter and a Little Tears