The Certain Scientific Railgun T is Quite The Shocker 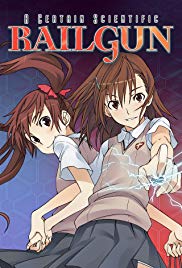 Do you like action-based anime? Then “A Certain Scientific Railgun T” is perfect for you! Follow the main characters Misaka Mikoto, Kuroko Shirai, Uiharu Kazari and Saten Ruiko as they venture through the many threats of their world.

Misaka, Kuroko, and Uiharu are “espers.” Espers have special abilities such as teleportation, electromaster, pyrokinesis, and more. People like Saten are known as level zeros because they have no ability.

When I first watched “A Certain Scientific Railgun T”, I wasn’t sure of what would happen. The more into the series, the better it got and more was understood. The character designs as each character looks different. Another thing in this anime is their personalities because, just like their designs, their personalities are different as well. One thing this anime does well is being action-packed.

While there aren’t many flaws, some flaws are evident. Introductions of certain characters could definitely be better. Later in the anime, certain characters are introduced quickly and we don’t get any time to learn about them. The abilities are also kind of roughly introduced but that’s to leave the watcher in suspense of what’s going on. One such ability introduced roughly was Misaka’s ability.

Characters in “A Certain Scientific Railgun T” have great development. Sometimes, their development is quite shocking because the anime makes you think one thing until it flips that around. One such character was Harumi Kiyama. She seems like a harmless scientist until you get later into the anime. As for their focus on personality or abilities, it’s more focused on both. In some episodes, the watcher learns about a character’s ability first and then learn about their personality. In other episodes, the watcher learns who they are as a character and then learn their ability later.

“A Certain Scientific Railgun T” is a great Anime for beginners to watch. There are currently three seasons and its director, Tatsuyuki Nagai, is still producing more. The third season was released on Jan. 10. If you’re interested in watching, you can find it on Tubi TV, Hulu, iTunes, Amazon Prime Video, Google Play Movies & TV, Vudu, and FunimationNow.

The Certain Scientific Railgun T is Quite The Shocker