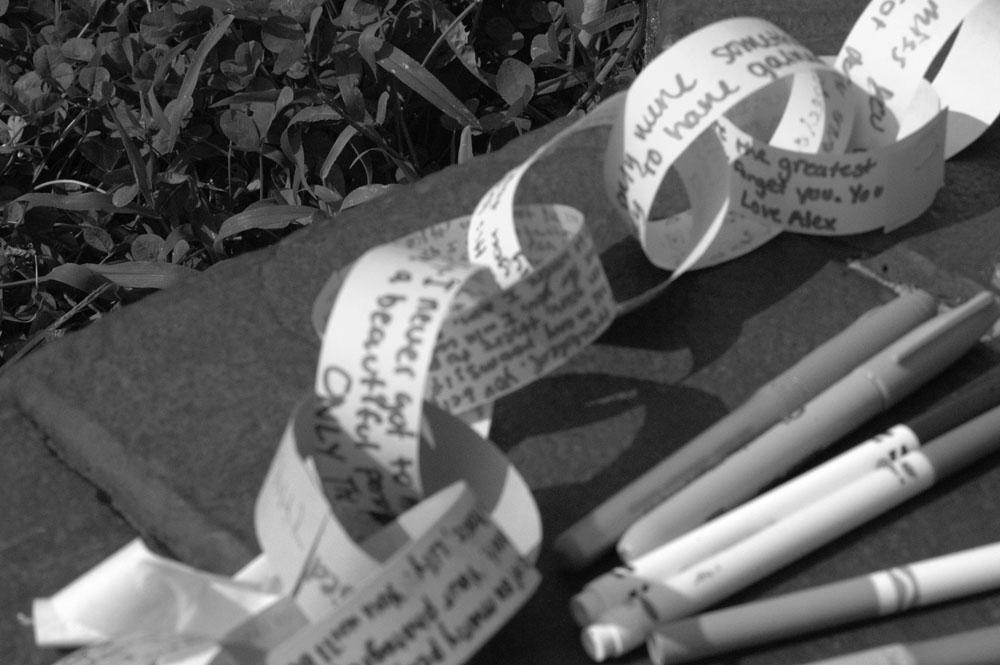 Students and faculty wrote memories of Lily Romando and connected them to a chain that was given to her father.

In the hallway near the front entrance of AHS, student art hangs on the wall in front of the auditorium. One of these stands out: a colorful and abstract portrait of a young girl with long hair, knees drawn up to her chest. The italicized type at the bottom of the picture presents not only the name of the subject of the picture, but also the artist: Lily Romando, a junior at Murray High School and former AHS student.

Lily, her mother Beth, and her brothers, college freshman Noah and eighth grader Andrew, were well known in the AHS community. Because of this, many AHS faculty and students have been experiencing feelings of grief since their unexpected deaths in late August.

The situation has inspired the school to provide resources and aid to those who are suffering from grief in order to help them heal. This includes tapping into the many emotions that come along with grief.

“Despite what we may see in the movies, the expression of grief can look different from what is usually seen on the screen.”  AHS psychologist Chris Love said.

“Everyone will process painful information a bit differently depending upon their past experiences with loss and personal comfort level in showing overt emotions. While some are openly weeping, many turn inward, look “numb” in an attempt to make sense over an unexpected, sometimes senseless loss.”

However, feelings of guilt, though common, should be dealt with as soon as possible. Those who are suffering should not be left wondering if something that happened was their fault.

In order to help each individual with their own feelings concerning the loss, the school is providing support through the guidance office while still maintaining a sense of normalcy. “I don’t think most of us ever actually ‘accept’ a personal loss.” Love said.

However, there is an effective way to deal with the feelings of grief without trying to conceal them or make them disappear. “We come to the point where we say, I can’t cry anymore, I can’t express this anymore, it’s time to move on,” Sheras said. “That moving on depends on rebuilding what was normal for them.”

Students have also taken more direct actions to help heal their grief. Open Facebook groups memorializing the Romandos have been created, as well as a separate group dedicated to Lily’s passion, photography. Each page has garnered over a thousand likes.

Students also showed their respect for the family by dressing in blue on Aug. 31, an action that soon snowballed into “Color Week.”

For the week of Sept. 4, hundreds of students and faculty wore a certain color each day: purple on Tuesday for Noah, Green on Wednesday for Elizabeth, and for the whole family, red on Thursday and then white on Friday.

Other efforts made by AHS students and teachers have also expressed their desire to come together as a community.

On Sept. 4, the day began with a school-wide moment of silence for the family.

A group of students then created a memorial in the breezeway that featured photos of and taken by Lily as well as blank scraps of paper.

Students had the whole day to leave handwritten notes on these paper slips for Lily and her family.

The family was also honored later at that Friday’s home football game, where friends of the victims released white balloons into the sky as the marching band played a solemn version of “Taps.”

Actions like these are seen as a positive way to express grief.

“Healing begins when you can find words or other ways to express what you are feeling.” Love said.

“It is important to give yourself permission to take the time you need to heal.”