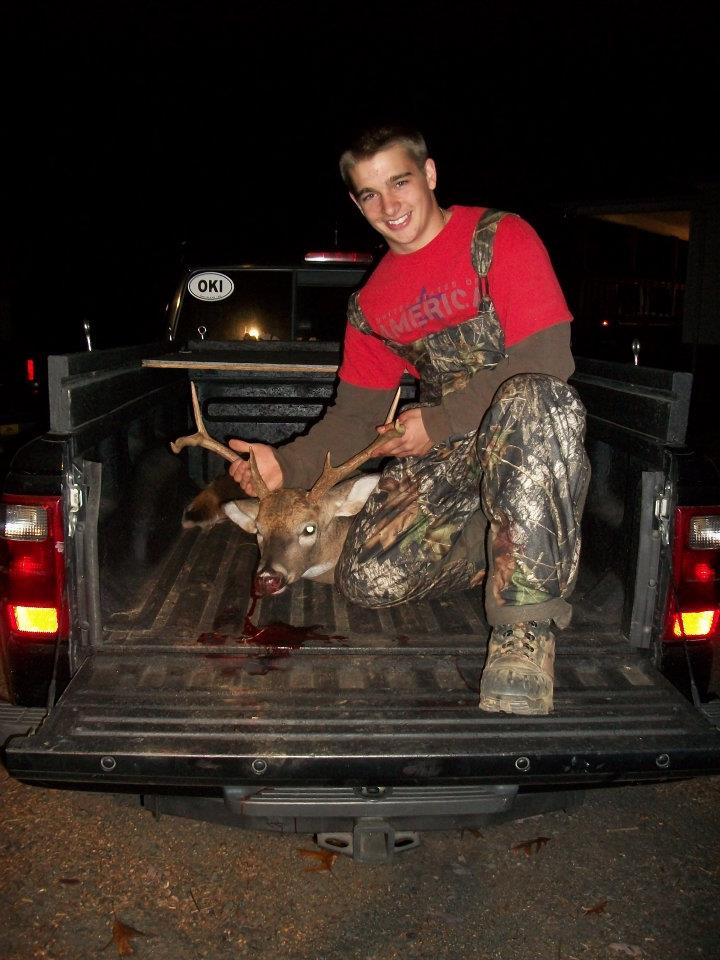 Junior Drake Bryant proudly holds up his fresh kill. Bryant has been hunting since the age of 5.

November, football season is in full swing, leaves are falling off the trees, people are gearing up for the holiday season, and outdoorsmen are on the hunt for a monster buck.

Junior Drake Bryant is one of these outdoorsmen. “There’s nothing like getting up early in the morning and having the adrenaline rush of a deer walking out and watching it fall,” Bryant said.

Bryant has been hunting ever since he was big enough to hold a gun (or 5 years old). “I remember always begging dad to take me when I was younger, but now I just take myself,” Bryant said.

“I hunt every chance I can get out,” health teacher and avid bow hunter Chris Campbell said.

Campbell has been known to race home after school in order to catch the last 45 minutes of daylight on weekdays.

“I occasionally have been known to get sick during hunting season and miss a day or two of school,” Campbell said.

The hunting season is divided up into three different time periods: bow and arrow, muzzleloader, and rifle/shotgun.  Muzzleloader is a type of gun, similar to muskets, like what was used in the Revolutionary and Civil War days.

Hunting with a muzzleloader is a skill. For the experienced muzzleloader hunter there is about a 45 second delay between each shot, unlike a rifle where you can chamber a new bullet in about 3 seconds.

The season begins earlier depending on the difficulty of the weapon.

“Muzzleloader is my favorite because the deer are starting to rut,” Bryant said. The rut is the mating season for deer, and deer are very active and moving around during this time.

This means that the male deer (bucks) are not thinking about protecting themselves from hunters or any predators. The bucks chase does (female deer) all over the woods.

When the deer aren’t in rut, hunters have to choose a different way to capture their prey. There are three different types of hunting: still, stalk, and drive.

Still-hunting is when the hunter picks a spot in the woods and sits till the deer of their choosing walks out.

“It’s a chance to get outdoors and see and enjoy God’s creation,” Campbell said. “To sit in a tree before daylight and witness the world wake up to a new day is priceless.”

For those who want to take a more active role in the hunt, they may prefer stalk hunting. Stalk hunting has the hunter is sneaking through the woods tracking the animal of your choice.

The drive hunt is where the hunters line up the border of their property and one of two hunters walk through the woods and try to push the deer towards the hunters on the border.

The ”dog” drive hunt can also be done the same way but instead of hunters walking through the wood the dogs chase the deer. This is more successful because the dogs can actually smell the deer and chase their track, whereas a person just walks though the woods making noise.

“I have hunted with both beagles and hounds,” Bryant said. “I like hounds better because they run the deer fast and I get bored of waiting on the deer when beagles are running.

Hunting is more than just shooting and killing animals. Hunting is a chance where generations can bond on the same thing.

“The only time that me and dad hang out is when we are out in the woods because hunting is one of the few things that we agree on,” junior Dwayne Wood said.

“My dad and granddaddy started taking me as a young kid and I grew up loving it,” Campbell said.

With hunting also comes work. After you kill a deer or any animal you have to field dress it, remove the hide, and butcher the meat.

Most hunters butcher the meat and put it in a freezer for their personal use. “We normally keep the first few deer and then once we’ve gotten what we need we take the remaining deer to Hunters for the Hungry,” Wood said

Hunters for the Hungry is an organization that will take deer meat along with any other type of game and distribute it to anyone who cannot afford meat.