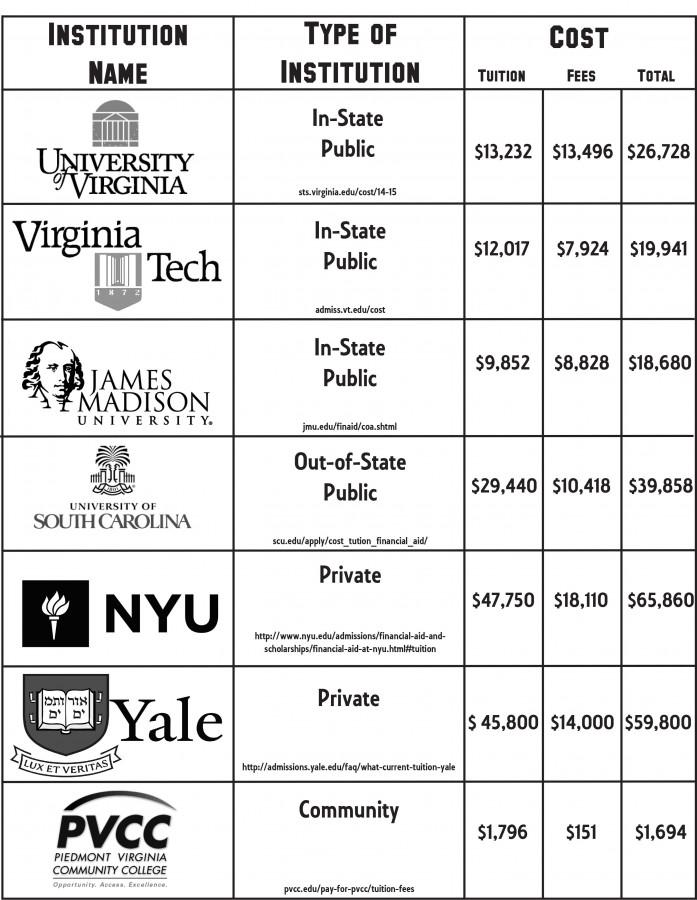 “My biggest concern about college right now is all the money. I’ll be having to work it all off in balance afterwards,” senior Carly Sprouse said.

Despite the rising prices of tuition and fees, 54 percent of AHS students attend a college soon after (~16 months) they leave high school, according to the Virginia Department of Education.

Plenty of students don’t share Sprouse’s anxieties, only worrying about getting in now and getting the money for it later. Yet the cost of college tends to be in the tens of thousands, so most can’t pay everything the college asks and hope to get out of the red several decades later. They’ll need some help paying, and planning on paying.

The first step in paying tuition is getting a scholarship. A scholarship, essentially, is money gifted to you to be used in furthering your education by someone willing to pay for you. They can come from anyone (like organizations or philanthropists) for any reason (like athletic or academic excellence) so long as whoever is gifting you the money believes you deserve it.

However, scholarships can be tricky to get, depending on what you want. Senior Joli Miliner applied for between 15-20 scholarships and estimated that she spent at least 24 hours working on the applications. “Some [scholarships] are just drawings that can take 10 minutes, and others take multiple hours and require several essays.”

Typically, you’ll need to ask for the scholarship (in essay form) and do some errands, like volunteering, which can be time consuming. Once you’ve filled out all the requirements, your bid is compiled, debated, and eventually accepted/rejected by a committee. And, even if you’ve got the scholarship, you’ll still have to wait around six weeks for a letter of confirmation, then keep maintaining the good work the rest of the year for whoever wanted to invest in you.

Yet scholarships alone won’t take out all the cost of tuition.Think of it like this: if college tuition is a dragon, scholarships would be your shield. It will take the brunt of anything tuition tries hitting you with, but it won’t really stop tuition.

So, if you aren’t one of the lucky few who have the money to pay or are getting full-rides, you’re gonna need something other than a shield to kill the dragon.

One option is the Federal Application for Federal Student Aid (FAFSA). FAFSA is a federal financial aid service meant for high school students who are otherwise not going to college because of the cost of tuition and fees. FAFSA offers several ways to help you pay for college: grant (free money based on finances), work-study programs where you work off any money you need to give the college; and student loans.

A student loan is a pretty simple concept: like any loan, you ask to borrow money from a source and promise to pay it all back (plus interest) later. Lots of students end up having to use them, so loans aren’t very different and are all very standardized, having the same interest rates, borrowing limits, and criteria for eligibility. The biggest difference is who is giving you the loan: either the Federal Family Education Loan (FFEL) program or the college itself, whose loans are more specified.

But how do loans help? Aren’t you just going to owe money (plus interest)?

Technically, yes, And that’s why most people are so apprehensive about using them. “I’m going to try and get as many scholarships as possible… Student loans are a last resort,” senior Alexandra Moreira said.

But despite the interest, loans are certainly helpful; with loans you can pay the money you owe over time unlike tuition -where there is a three month deadline- and store some of the extra money you borrowed with the college, to be used next year. But there are still different types of loans you can get: the public-sector and private-sector.

There are two main types of public loans: Perkins and Stafford loans. Perkins loans are handed out by colleges and are specified to each student’s financial needs, and thus might be hard to get due to lots of demand and little supply.

Stafford loans, conversely, are very standardized, easy to obtain, and are given under the FFEL’s supervision.They also have low interest rates, which can be helpful to low-income students.

But, of course, if there’s money involved, there are banks. Getting a student loan from a bank can be useful because they offer as many cool features as they can, like automatic debit. However, they are also very selective, being based on your credit score, and often end up requiring that a parent cosign (partner up on a contract), because you’re new and no one knows whether you stink at handling money or not.

But there are ways to go to college without hoping someone else will take pity on your poor, broke soul. “I’ll be working for  a year beforehand… I’ll have $30,000 from the get-go for college,” senior Brennan Pixton said.