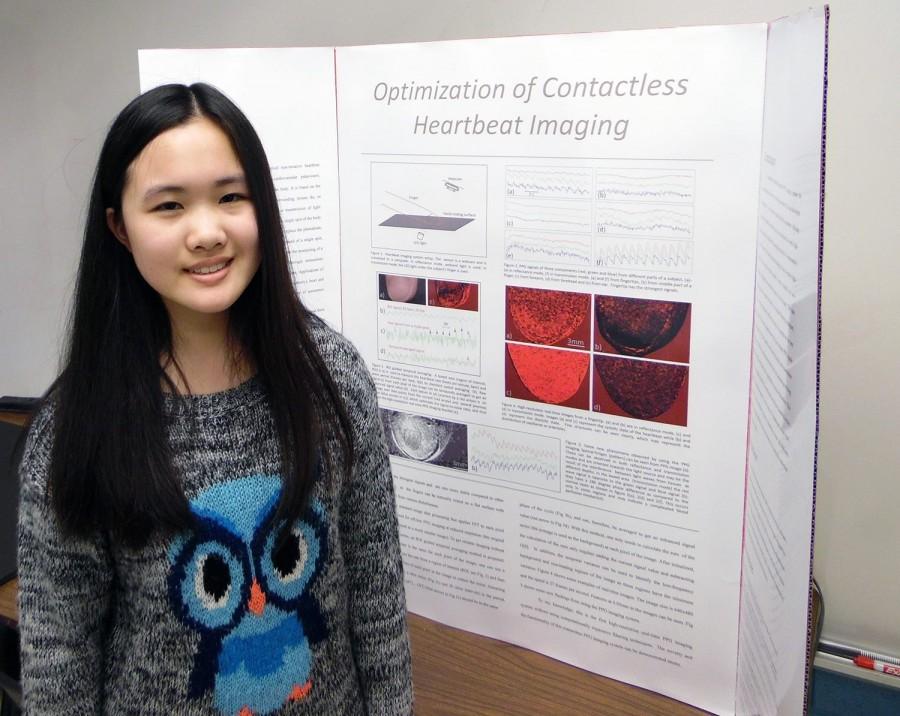 Runner up Selena Feng at this year's Science Fair.

Feng has competed in the science fair for three years of high school and has dominated her category each time. This year, as only a junior, Feng has not only won major prizes in the science fair, but become a mentor for young girls in the computer science world, a Governor’s School contestor, and an MIT Institute finalist.

“Selena has come up with all her ideas and done all her research herself. She has not come to any of the MESA administrators for help. I’d have to say that 99.9% of everything she does is all her,” Prillaman said.

Prillaman has not been Selena’s actual teacher, but has had the opportunity to see her in competition and has worked with her during past science fairs.

“We [the teachers] are not allowed to really interact with the competitors because we may have the chance to give them additional information, but what I do work on with Selena is the “soft stuff.” Making better eye contact with the judges and things like that,” Prillaman said.

This year, Feng created a Photoplethysmography Imaging System that is used in place of a heart monitor attached to the patient’s fingertip. This monitors the changing of the volume of the patient’s blood and the temperature by color which then eliminates the need to have a finger clamp.

Feng won a Battelle Innovation Award and $250 in prize money, as well as a International Council on Systems Engineering Award for first place and $100 in prize money.

In last year’s science fair, Feng won a fourth place grand award with an electronic mouse that uses a camera that traced the movements of a person’s hands as if a person was holding the computer mouse itself. Feng’s personal favorite or most interesting project that she thought was the best was her electronic mouse.

Feng is also a lead programer on the AHS Robotics Team called NYX, which consists of anyone and everyone in high school that wants to join.

“We don’t necessarily practice like other sports. We build a robot all season that corresponds to the challenge given and then we compete on different levels,” she said.

This year, the Robotics Team received a first place alliance award at the State level, but were not able to advance any further.

Not only does Feng compete on the high school level, but the middle school level as well. Feng helps run a program at Jack Jouett and Henley Middle School called Girls Excited for Technology.

“The girls are really cool. They get interested through the gifted program through their school, but I’m sure that they also find out that their friends are doing it and they want to too,” she said.

Mentoring and competing in computer science is one activity that Selena takes on during summer as well. This year, she applied to be a mentor in the Governor’s School for engineering and to be a part of a six week long Research Science Institute at MIT.

“I applied to the institute at MIT for this summer where all the students are paired with a mentor who is in the field of work you’re interested in,” Feng said. The first week is an intensive course on different sciences and different math, and the next five weeks you conduct research on the field you’ve chosen.”

“The line of work I have chosen to be in are computer and neuro sciences. I like computer science because it is supposed to relate to how the human brain and actually imitates what it does,” Feng said. “The neuroscience is  more of the biology aspect that I am interested in.”

Feng has received countless awards and scholarship money which she says, “is nice to have external confirmation that she did her job well done,” and she is “generally excited” but that she competes “because it’s what she really interested in.”