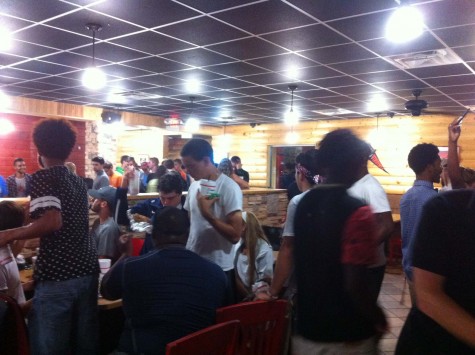 It’s Friday night, and you’re standing in the entryway of Cookout, looking into a sea of red, white, and blue. You’re getting bumped into from each side, and you’re squeezing yourself in between two sweaty and foul-smelling football players to try and get in line to order some food.

Everyone is talking, you can’t hear the person in front of you, and you have to repeat yourself three times before the cashier can understand your order.

You push your way through to the soda machine, fill your cup up with Dr. Pepper, and turn around into someone’s back, spilling your drink all over yourself and the ground.

“It’s sorta like a tradition,” varsity football player senior Jesus Lazo said. “Where everyone goes to enjoy good food and talk about the game.”

What could possibly be so appealing about a crowded room with sweaty players and crazy students?

Senior Giffin Coffey, an active member of the student section, loves Cookout’s milkshakes and thinks people go because, “it’s big enough where everyone can sit down and talk.

But the massive amount of people present sometimes makes it difficult to get these delicious milkshakes. Coffey tells about how Cookout was so busy and crowded that he didn’t even get the food he ordered. “I waited for 25 minutes…. and it wasn’t there, and I was tired so I went home.”

“I was really mad. I was pretty hungry,” Coffey said. But somehow, all this irritation and money wasted doesn’t actually matter. “The main point of going is to hang out with everybody, not the food.” 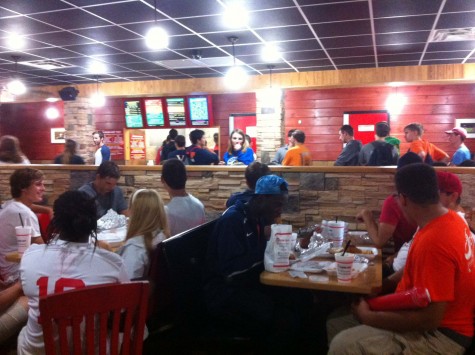 “It’s just a team bonding after the game. To be with the varsity guys,” Lazo said,

Coffey speaks on behalf of the students, “first, we wait for all the football players to show up. Then, we congratulate them and talk to them about the game.”

On a scale of one to ten, one being boring and ten being crazy, Lazo said Cookout “can get up to a ten, especially when you win and a lot of your teammates are there to be in that environment.”

When at Cookout, Coffey said the students “talk to the other high schools, and if they lost, we can brag a little bit.”

While the actual employees of Cookout would not comment, Lazo thinks that “it makes their night.” Lazo said that he “doesn’t usually have a problem” with the behavior of the students or football players, and that if one of them were to step out of line, “we’ll get him under control, because if one of us gets in trouble, we all do.”

According to Lazo, Cookout is “gonna be passed down for years to come.” So if you haven’t gone yet, be sure to join in on this tradition after the Monticello Game this Friday, October 30th.