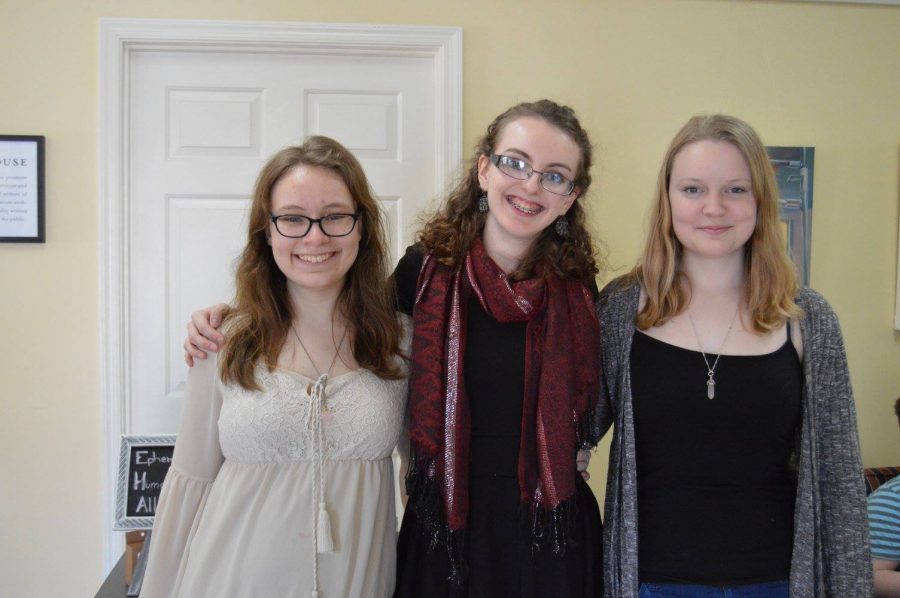 Rundle, McCoy and Umberger celebrating their most recent release at the Writershouse on February 28th, 2016.

Junior Kieran Rundle wanted to be a published author.

In the summer of 2014, Rundle received so many rejection letters that she got aggravated. Instead of giving up, she decided to make her own magazine.

“I became really frustrated and grouchy and surfed Pinterest in procrastination from all of my summer homework, and then I just became really stubborn,” Rundle said. Thus, Sincerely Magazine was born.

“I chose an online self publisher that prints on demand that I had experience with, made a website, made a Facebook page, and decided that if no one else was going to go out there and help create a community for writers that are just starting out, then, why not me?”

While the magazine was Rundle’s inspiration, juniors Kayleigh McCoy and Emma Umberger have been her co-editors

“I started working with Kieran on the second volume and I am art editor and online editor,” Umberger said. “My main jobs are keeping our social media and website up to date and helping judge and pair art to writing for spreads.”

Rundle, Umberger and McCoy work on getting the magazine done, with only the money from patrons.

“We’ve held staff meetings at the pool before with my huge whiteboard and Fourth of July cookies to talk about themes, goals, how to branch out, new ideas, and so on,” Rundle said.  “They’ve switched off to come downtown with me everyday after school one week without fail to ask local stores about becoming patrons,”

“We publish people from literally all over. People also have been accepted from England, India, and (of course) America,” Rundle said. Salma Feteha, a 16-year-old from India, has been published in every single magazine.

Even with all the pressure that comes with making your own magazine, these three still adore it.

“ I really enjoy working on the magazine. There is definitely some stress involved in making a magazine, especially around deadlines, but it is a lot easier working with a team. There are three of us so we can distribute the work and help each other out. It is definitely worth it. It’s really rewarding to see the finish product,” Umberger said.

“The support and dedication from Kayleigh and Emma, the community of Charlottesville, and my family to a project no one believed possible in the beginning is astounding,” Rundle said. “Sibley Johns, the director of Writer House, allows us to have our release parties there and has always supported our magazine.”

Sincerely Magazine comes out every January and June (After exam weeks and Winter Break). The official release date for volume four is June 15 and you can get yours at sincerelymagazine.com or in local stores.