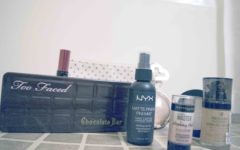 What's in my makeup bag?

Makeup has been in history for a very very long time. From the Egyptian eyeliner to the ghostly white faces of the Elizabethan era English, no wonder it is an iconic trademark for women.
“At first it [makeup] was presented to women to please men. Like in the times of the 18th-century women in France wore heavy powders because fairer skin was a sign of perfection. Changes in makeup appealed to what men wanted from women. Fast forward through the 19th-20th-century makeup is now for what women want. It went from what men wanted to what women want,” junior Caroline Sheppard said.
Many believe makeup in itself is material and whoever wears it is insecure and “ugly”. But those who wear makeup say it is like a painter with a blank canvas.
“I think women put on makeup for self-confidence. I find makeup fun and it is a way to express yourself. It’s not to look good for others,” freshman, Annie Urmanski said.
“I like doing it because it is an art form. It can make people feel better about themselves,” freshman, Anabelle Townsend said.
“The process [of doing makeup] is relaxing. It’s like art in the morning,” Sheppard said.
“You should start with using drugstore makeup instead of wasting money on Sephora when starting to do makeup,” Townsend said.
“Watch videos. It helps a lot,” Urmanski said.
“It takes practice. Make sure to wash it all off, including mascara,” junior, Emily Eagleson said.
“Start with the right mindset. Don’t start using it because you want to look good for a cute boy, no you should start because you want to do it for you,” Shepard said.
Students wear makeup for a variety of reasons, but what would cause them to stop wearing it?
“I would stop using a product if it didn’t stay on for a long time or if it rubs off easily. Or if it runs out easily. Or if it is not pigmented,” Townsend said.
“If it [product] had a bad reaction with my skin or if it was the wrong color,” Urmanski said.
“If it hurts animals or is inhumane,” Sheppard said.
“I stopped wearing it [makeup] over the summer because I felt no need to. I started wearing it at the beginning of the school year but my acne got worse,” Eagleson said.
Many people wear makeup. It’s easy to access. But do students really know what is going in their makeup?
“I have no idea, even though I probably should know,” Urmanski said. Both Urmanski and Townsend do their makeup daily but know very little about what goes into their makeup at all.

Cosmetics labels use big words, such as Octinoxate, Cyclopentasiloxane, and Mica in their ingredients. Most students do not have an advanced degree in chemistry to understand what these ingredients are.

People should not be discouraged when trying makeup;
they should test out makeup products and find what works
the following for them. They should still the following
chemicals in any product that they would buy.

What’s in my makeup bag?