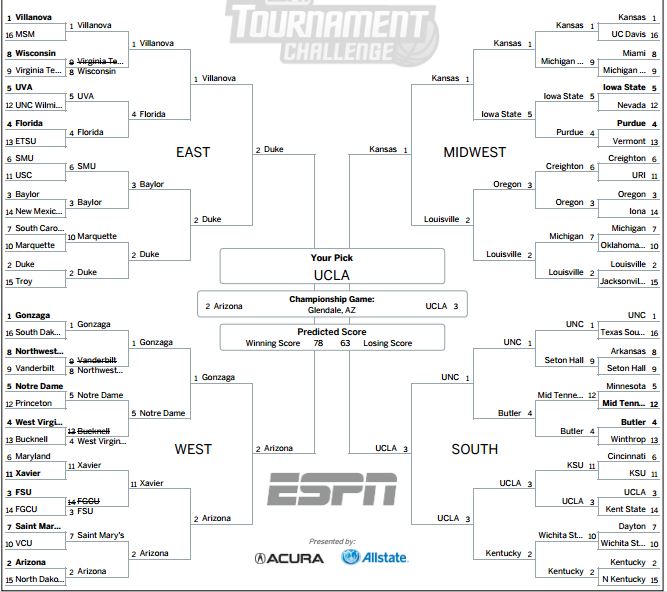 Jake (Fire): Annnnnnd we’re back! March Madness has returned, and bracket season is officially upon us. Personally, this is one of my favorite times of the year, as it is Grayson’s (Ice) also. I’ll get right into analyzing my bracket.

The biggest upset I have is Florida Gulf Coast defeating Florida State in the first round of the tournament. I can’t trust Florida State due to inconsistent play, and we all remember the incredible run FGCU (Dunk City) went on a few years ago, where they started a #15 seed and ended up in the Elite Eight. I also have Mid -Tennessee defeating Minnesota in a game I don’t think will be particularly close. I think the scoreboard will look like I just played Grayson in Madden (Grayson has never beaten me in Madden and never will…).

I also believe Xavier will defeat Maryland in the first round, which will set up Florida Gulf Coast, and Xavier in the round of 32. The team you may want to watch out for is Florida, they are kind of a sleeper, but have enjoyed success in the tournament in recent years.

Two teams ranked very highly that I don’t trust are Kentucky, and Gonzaga. I have Kentucky losing to UCLA in the Sweet Sixteen, while I have Gonzaga losing to Arizona in the Elite Eight. While the Elite Eight is nothing to roll your eyes at, for a number one seed a Final Four appearance is nearly always expected.

My Final Four consists of Duke taking on Arizona and Kansas taking on UCLA. Breaking down Arizona and Duke, as much I would like to have Duke winning this game, I think they lacked the firepower too often this season to hang with Arizona. Duke has been very inconsistent this season, so they are bound to have an off day at some point this tournament and I think that very well could be the make or break in their season. Arizona will win by around ten, and advance to the championship. Getting into the second game of the Final Four, I think UCLA will roll to victory over Kansas. Lonzo Ball is the real deal, and I think he will show up in a big way as UCLA advances to the championship to face Arizona.

I believe once again Lonzo Ball, will ball out (pun intended) as UCLA will claim the throne and blow out Arizona to win the NCAA Men’s Championship by a score of 78-61.

Grayson: NCAA March Madness, the best sports tournament on the planet. I love football, but personally, I like March Madness more than the NFL Playoffs. This year has been quite interesting up until this point, with just about every team proving that they can lose on any given day. After the upsets and shockers in the conference tournaments, college basketball fans should be ready for anything to happen.

Starting off in the East, the frontrunners are a red-hot Duke Blue Devils team at the number two seed, and Villanova as the overall number one seed. I predict a UVA vs ‘Nova rematch in the Sweet Sixteen that will surely be a great game. I have Duke coming out of the East, continuing to ride their hot streak.

Moving on to the Midwest, the top two seeds, Kansas and Louisville, are both great programs and will be hard to beat. The teams most likely to top Kansas or UL are Iowa State, a team that can shoot the lights out and is hot entering the tournament. Michigan and Oregon are also my sleepers in this portion of the bracket. Michigan has been playing on a completely different level after their plane ran off the runway prior to the Big Ten tournament and has great team chemistry. While Oregon losing star player Chris Boucher is a big blow to their chances at a national championship, don’t count the Pac 12 champs out completely. The Ducks are still dangerous, they play great defense and are one of the best teams at blocking / contesting shots. If the Ducks can spread the ball around and get second shot opportunities, they could play spoiler and run away with the Midwest.

In my bracket, however, I have Frank Mason III and the Jayhawks beating Oregon and moving into the Final Four. I have some issues with the West. Yes, Gonzaga only lost one game, and yes, they are a good team, but Arizona is the best team in this region despite being a two seed. They played a much tougher conference schedule and have proven themselves to the nation. I don’t trust Florida State or Maryland; it will be easy for Arizona to walk right into the Elite Eight.

One of my bigger upsets is Notre Dame beating Gonzaga in the Sweet Sixteen, and then losing to the Wildcats as Arizona takes the West and moves on to play Duke in the Final Four. Up to this point, most of the games I have picked have been pretty chalk (the higher seed winning), but the South is the outlier to that trend. In the first round I have half the games being won by the lower seeded teams. In the first round I think the only safe teams are North Carolina and UCLA. I have Wichita State beating Kentucky in the round of 32 but losing to UCLA to set up a UCLA vs North Carolina Elite Eight.
In my Final Four I have the Blue Devils beating Arizona in a close game, and the Jayhawks blowing their game from poor shooting. This sets up an interesting championship rematch of Duke and North Carolina. In the end, I think Roy Williams veteran squad led by Justin Jackson will top the Blue Devils in a shootout, 81-74.