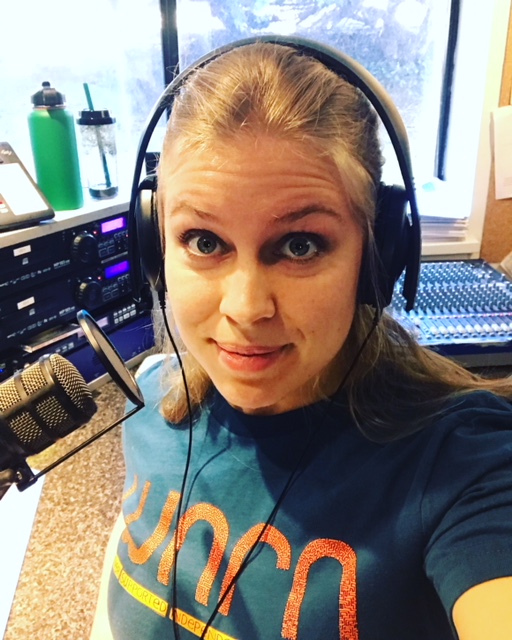 Sitting on the couch with reading glasses and a red pen grading papers may seem like a normal Sunday afternoon for an average high school teacher.

That’s exactly what English teacher Lori Reaser was doing when she heard a familiar name over her radio.

“I’ve always listened to WNRN on Sunday afternoons because I liked the music that Sydney Sharp, the former DJ, would play,” Reaser said, “Then one afternoon, I was listening and instead of Sydney Sharp, the DJ announced herself as Liz Dinwiddie.”

Yes, THAT Liz Dinwiddie, the guidance counselor. She spends her Saturday nights and Sunday afternoons on the air at 91.9 WNRN, a local community-supported radio station.

Dinwiddie pre-records her shows on Friday nights or Saturday mornings to be played from 8PM-12AM on Saturdays and 2-8PM on Sundays. Her shows feature a lot of Alt-Rock artists but she makes sure to play a wide variety of other musical genres. Some of her favorite songs to play are from groups like Sylvan Esso, Neil Young and The Pixies.

“It’s music that I sing along with, but she also introduces me to new artists and new tracks that get into my rotation,” Reaser said, “she also has a great balance of giving information about the artists and songs and playing music.”

This story doesn’t start recently, however. Dinwiddie began exploring this interest at age 15 by volunteering at WNRN while attending AHS.

“Music is a huge passion of mine,” she said, “so it was a natural fit. I remember my mom having to drop me off and pick me up from the station,” she said, “I would have to stay really late on Friday nights, but I loved it.”

After volunteering in her high school years, she was offered a full time position. She ended up going to school at Appalachian State in North Carolina, but when she returned home to work at AHS, she decided to go back to her roots and work in the studio once again.

“It’s important to have a hobby,” she said, “This keeps me sane and balanced.”

She encourages avid music listeners to tune in to the show but also to check out the WNRN YouTube page for more content.