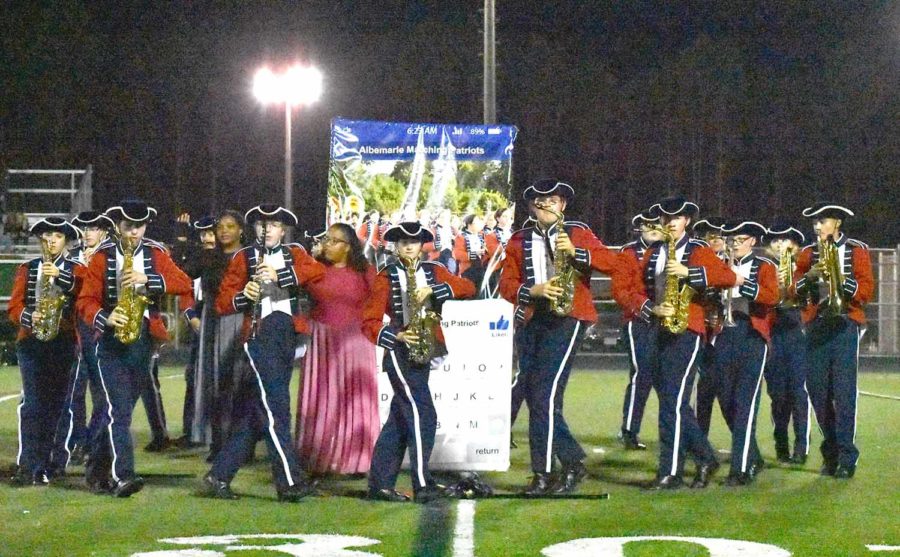 Each year band director Greg Thomas picks a theme for the Marching Patriots to perform. Social media is the theme of this year’s show for the marching band as they perform A.I by John Fannin and Josh Powell.

“This theme of artificial intelligence seems to fit with some of the current things that are happening today,” Thomas said. “I try to pick a theme that students can relate to in their life. So picking a theme of dependence on social media is a fun thing to make fun of. Everyone experiences it.”

In “Ignition” by Todd Stalter, the first movement, the Marching Patriots are still hooked to their phones and social media.  Sophomore color guard member Lauren Pierce takes a selfie halfway through with junior baritone player Joseph Lorber and the rest of the marching band photobombs them.

After their selfie, the photo appears on a giant prop phone.

Going into the second movement, “Artificial Intelligence,” Thomas describes it as “slow and beautiful.” The phones that the Marching Patriots had in the beginning are shown with a dead battery.

“It depicts people having some sort of human interaction,” Thomas said.

The third movement, “Founding,” shows how the theme of the second movement fails and everyone results back to their old ways of seeking approval on social media. The human emotion is shown to perish under the “steel toed boot” of social media.

“I like how much the theme relates to our society right now,” senior color guard member Bianca D’Costa said. “It shows how everyone is sucked into their phones and doesn’t have any connection to reality.”

The Marching Patriots have 86 members, with 25 percent of them rookies. There was a big graduating class of 2018, so Thomas knew that this years show would be tough, but he keeps positive.

“I really love the color guard, we have seven of 15 new members and they’re still killing it,” Thomas said. “I think the band as a whole has a really great work ethic. I was worried before the season because I knew it was going to be a young band. Most of our strong leaders left but others stepped into their leadership roles.”

Junior Grace Baldwin stepped up to fulfill that leadership role in her first year as a drum major. “It’s really cool. Instead of being a dot on the field, you get to see the whole picture.”

“I was unsure of it [the theme] at first, but as it started to develop and come together I saw its potential and I’ve grown to like it,” Baldwin said.

“It’s important to me that my students contribute to the show as it develops,” Thomas said. “I don’t want to hand you a package and say, ‘execute this as is.’ I want to say, ‘here is an idea, let’s develop it together.’”

Juniors Reagan Dolak and Landon Allan came up with the idea to add a move in “Founding” where band members are in pairs and compete by stepping in front of each other, trying to stand out the most.

After 100 hours of band camp and over 58 hours of practice so far this year, the marching band has become like family for members.

“I’m really going to miss the friends and community we have here,” Ferralli said.

You can see the Marching Patriots in action this Friday after the Homecoming Game or at the Oct. 26 home football game at halftime.