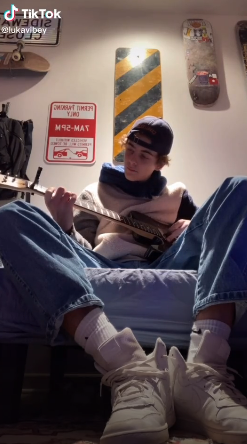 Most people have gone through some version of this process: Come up with a video idea, set up your phone, press record, come up with a caption, then post onto TikTok, sent with a prayer that the app’s mystical algorithm would deliver it to other users’ For You pages.

For average users, a few likes and comments from friends is all that we can muster. Imagine refreshing your phone over and over, with hundreds of new notifications popping up each time. Turns out, you don’t have to be Noah Beck and live in an Los Angeles content house to have this happen. TikTok fame might be a whole lot closer than you think.

For junior Luka Elkind (@lukavibey), all it took was a few strums on a guitar to experience overnight success. After spending a day learning how to play it followed by only two takes of filming, he posted a video of a riff from Baby Bash’s “Suga Suga.” An avalanche of notifications immediately hit Elkind’s phone, with likes and comments pouring in.

He had already had some success on the app;  a clip of him playing Jack Johnson’s “Upside Down” helped him get to 7,000 followers. His “Suga Suga” clip shot him into the stratosphere, however, bringing him to 130K followers. As for the amount of fans, he’s still processing the number.

“I’m still like weirdly blown away by how it works, but it felt super odd to have people that were random just be like ‘Oh, I want to follow you’.”

His virality, however, wasn’t just contained to the Northern Hemisphere. Being half Brazillian, Elkind has some friends in the country, and his video made it to the For You page all the way in South America, as some of his friends from Brazil sent it to him. With his video sitting at 4.1 million views and 1.5 million likes, Elkind wears the unofficial crown as Albemarle’s TikTok king. 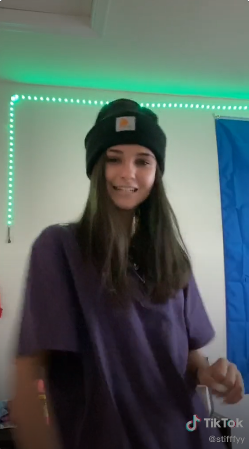 Freshman Kelsey Jones (@stifffyy) has taken the longer route to TikTok fame. Instead of one viral moment propelling her account, she’s had a handful of clips that have gotten a few hundred thousand views, highlighted by a ‘POV’-style video that has 2.3 million views and almost 400K likes. She also doesn’t focus on one specific type of content, instead basing her videos off of “random things that come up on my For You page.” This method has worked out, as she boasts 171K followers and 2.3 million likes on her account.

However, Jones has experienced a darker side of the app. She reports getting lots of negative comments and messages from “people who are hiding behind a profile picture.” Due to this, she falls into the cycle that is similar to many other users, where she deletes the app periodically to escape from the pressures that it can cause.

The app is toxic… so facing that, sometimes you just stop posting for a period of time.”

“The app is toxic… so facing that, sometimes you just stop posting for a period of time,” she said. One comment that stuck in her mind was a user who said “Oh look, another girl who will scream ‘victim’ in 6 years.” Jones is 14 year old.

However, TikTok isn’t just limited to the students at Albemarle. Principal Darah Bonham (@principalbonham) says he was convinced by a student prior to the COVID shutdown to create an account.

After making a couple TikToks and figuring things out, he was inspired at a faculty meeting to find a way to celebrate students’ birthdays while not physically being in school. “I started daily TikTok shoutouts… I counted and I did 50-something of them in a row.”

A basketball trick shot/birthday shoutout clip racked up over 80,000 views and almost 10k likes. Not too bad for someone who grew up in an era that didn’t have cell phones.

He’s mostly stuck to birthday shoutouts (now on a weekly basis), but has tossed in other types of content, ranging from graduation recognition for the Class of 2020 to an AHS-style parody of user @420doggface208’s cranberry-juice sipping skateboard ride, set to Fleetwood Mac’s Dreams. 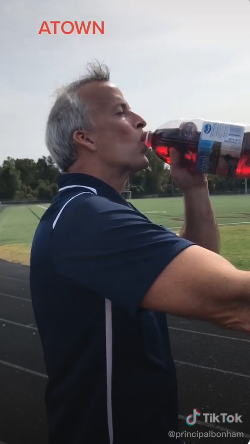 Even though he’s the principal, Bonham is subject to the same allure that TikTok holds. “The app is almost like a rabbit hole that you fall down, then you wake up three hours later and you’re like ‘How in the world did I end up where I am?’”

At the end of the day, Bonham keeps things light hearted as “most of it’s just trying to make fun of myself a little bit.” As for the future of his account, Bonham thinks that having students come back to Albemarle’s campus in March will make a difference in his content, with the ability to “shift the focus away from me and get the spotlight on to students.”

The way that this spotlight shines on Albemarle’s resident creators is an interesting additional facet to going viral. Both Elkind and Jones have met people that they typically wouldn’t have come into contact with as a byproduct of their fame. Elkind has chatted with Jake Dever, (@jakesterguy), a creator with 1.2 million TikTok followers, and Jones is friends with Dylan Overstreet (@thatkiddylan), who sports 1.4 million fans.

Jones says she also has gotten added to several different group chats on Snapchat with other creators that have a similar following, which she says is a generally positive experience.

Elkind got the opportunity to become a part of SwipeHouse, an app that is focused on fostering collaborations between creators, and comes with a certain level of exclusiveness, since users have to apply to have an account and prove that they’re worthy of a spot.

His TikTok fame seemed to have a ripple effect seen on other platforms, as Elkind went from around a thousand Instagram followers to 7K in a couple of days. However, in a peculiar trend, he started losing followers there soon after. “I realized it’s because everyone thought I was posting more guitar content on my Instagram, but my Instagram is just my skateboarding.”

Additionally, he says he has over 2,000 random people who have added him on Snapchat, a group that aligns with his TikTok ratio of 93% female followers. Jones has seen a similar uptick on other social media platforms with her 12.9K Instagram followers.

After having a video blow up, some might wonder how one is supposed to follow it up. Do they make something similar and go with a tried and true formula? Or do they switch things up, not wanting their content to get stale? Elkind has mixed feelings about it.

“After you reach those views and those likes, and then you post again and you don’t either surpass it or get something similar, it feels like ‘Oh, I’m not doing enough, I’m not working hard enough,’” Elkind said.

Jones, on the other hand, said that she does sometimes try and repeat videos that have gone viral, but it doesn’t really work, since the content of her videos are all different from one another. They both agree that all videos and their chances of going viral are simply subject to TikTok’s algorithm at the end of the day.

As for their goals for the future, Jones wants to hit 200K followers. Elkind takes a different approach, one that’s less focused on hitting certain follower benchmarks.

“If you’re actually doing something that you like, you shouldn’t worry about the followers and the money, it’ll come after.”