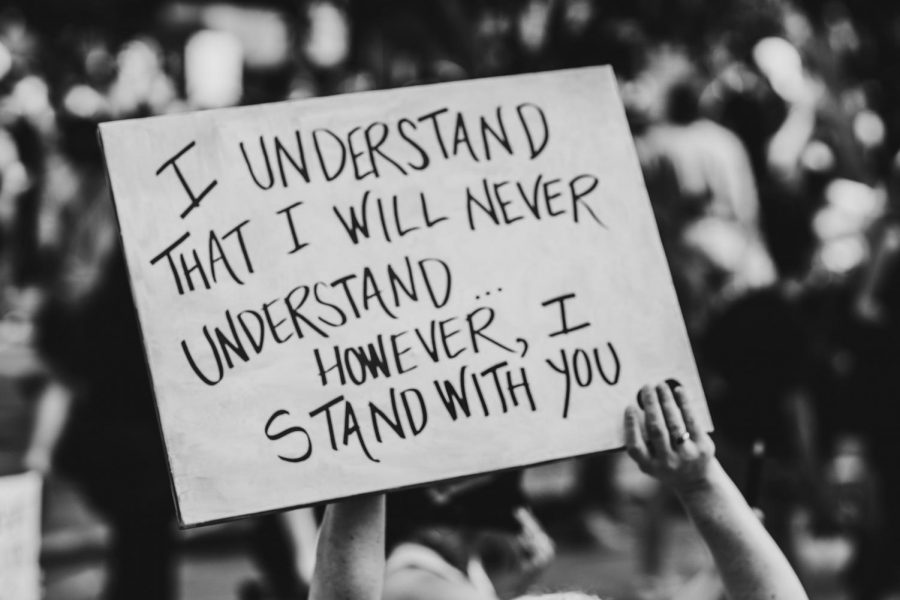 Students of all races can stand together by calling out bias or prejudice when they see it.

An 84-year-old man was killed in San Francisco. A 55-year-old woman was left unconscious after an attack in Oakland. A 61-year-old man was slashed across the face on the subway in New York, left unable to talk.

These attacks may seem random, but they are all linked to the same cause: anti-Asian sentiment. Since the start of the coronavirus, hate crimes against Asians have risen by 1900%, according to Stop AAPI Hate.

Former president Donald Trump and his administration have been blamed for encouraging anti-Asian sentiment. Trump has repeatedly referred to COVID-19 as the “Chinese virus” and “Kung flu,” which reinforced racism and xenophobia.

Since the start of the coronavirus, hate crimes against Asians have risen by 1900%.”

“I think [hate crimes against Asians] probably came from the fact that Donald Trump said a bunch of stuff like ‘Oh it is the Chinese virus,’ and then people just assumed that [Asians] all have something to do with that, which is obviously not true,” said Chinese-American sophomore Weining Ding.

The Biden administration has already made an executive order to combat discrimination towards Asian Americans during the pandemic, trying to reverse the former president’s impact. However, there is still much more to be done to fight against this hate and prevent the racism against Asians.

Ding, who has experienced microaggressions her whole life, thinks those changes should start at school curriculums.

“I want more attention towards [racism against Asians] in school because I went to a really white elementary school, and what I was taught, I learned now was very wrong. I want it to be talked about in schools starting earlier, because earlier exposure forms a better perspective.”

“A specific example is when I was in elementary school and my teachers read me Dr. Seuss books, specifically [‘And to Think That I Saw It on Mulberry Street’]. Now I learned they had a lot of Asian stereotypes and I assume my teachers either didn’t know they were stereotypes or didn’t care. Either way, that’s an awareness issue and it needs to be changed because little kids are very impressionable and if you’re teaching them this kind of thing it will probably not benefit them later.”

…that’s an awareness issue and it needs to be changed”

Due to racist imagery, Dr. Seuss Enterprises has stopped publishing the Dr. Seuss book “And to Think That I Saw It on Mulberry Street,” saying in a statement, “These books portray people in ways that are hurtful and wrong.”

This decision emphasizes the need to re-examine books that are shared with children and hold big companies accountable for racism.

She thinks that one solution to preventing these hate crimes would be to give the perpetrators “severe consequences” and show that the hate crimes aren’t being dismissed.

“A solution would be showing exposure to it, which is not dismissing it as an isolated thing. And I think just giving it more exposure, spotlighting it like it has been is a way to at least decrease it. Being able to give the victims in these situations a voice, and showing that it isn’t just someone’s random grandmother but showing that this is a real person.”

Since the pandemic, Sherwell has had a “heightened level of awareness of [her] Asian-ness.”

“Going into grocery stores I did feel like, especially at the beginning of lockdown, people looked at me a little longer than normal. Again, it was maybe one of those things where we were all more wary of each other. I do think that I feel safe around here, but I think I do have an added layer of vigilance, especially when I’m by myself.”

And for her, watching the hate crimes happen “was really scary… especially given how violent some of the attacks were.”

Ding says a solution to stopping these hate crimes is “more information that [Asians] aren’t bringing the virus over here.”

“I think the more that we can increase empathy in viewers, maybe ones who don’t even know that this exists, is so important because I think with any sort of hatred or crime that happens in the dark and is hidden, the more we can put it in the light will, by its very nature, decrease it,” Sherwell said.

“I see it as sort of a grassroots effect. Slow change can lead to bigger change, which can lead to someone more long lasting.”

We say Asian, and that means hundreds of different things.”

“We say Asian, and that means hundreds of different things.”

And as this topic gains more attention, she wants to pose the question to everyone who is listening, “Who gets to be an American?”

“I would just want to turn that question and be like, ‘Who gets to be an American?’ And how much are you willing to learn someone’s story before jumping to a conclusion. How many times have I been asked, ‘Where am I really from?’ and then, me being me, I say I’m from Salibury, Maryland.”

“And I know that’s not what they mean, but that’s what I say and their face is like “Well what’s your origin?” And I’m like, what am I? A product from a factory? That’s such a strange question to ask someone.”

“If I could speak to a populus of people, I would ask ‘Who gets to be an American?’ And however you respond to that, that’s something that you’re going to have to work out on your own,” Sherwell said.

Sherwell’s opinion highlights the importance of listening to those you know who have to deal with prejudice and discrimination.

Ding shared that she has had “a lot of white people express their sentiments about how Asian people don’t [experience] racism.”

For those wanting to be allies, instead of making assumptions about Asian people’s experiences, try to pay attention to the people you know who have to experience prejudice.

And while it may seem like there aren’t many ways to prevent these attacks across our nation, there are many other ways you can help.

Raise awareness and learn more about these attacks by following the #StopAAPIHate on social media. If you ever see or experience anti-Asian assault, report it to https://stopaapihate.org/. Support your local Asian-American owned businesses. Call your legislators and ask what they are doing to support the AAPI community.

And lastly, remember that Asian isn’t a virus. Racism is.