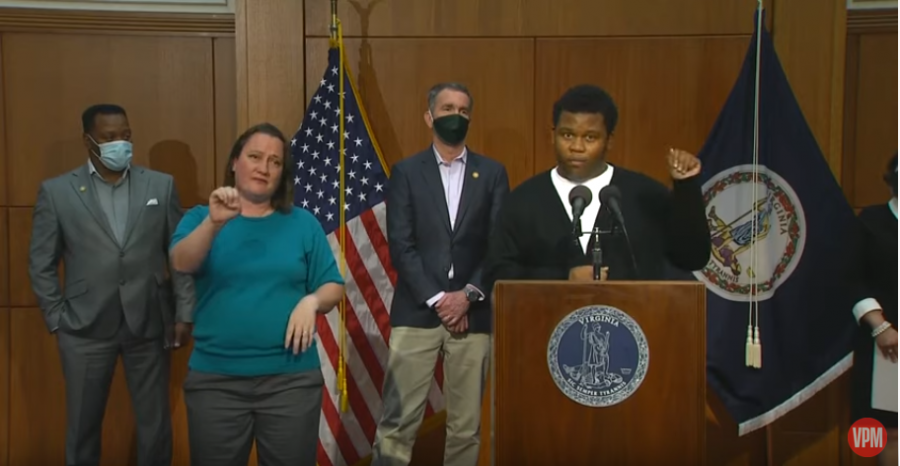 Like many high school students during quarantine,  junior Naquel Perry’s sleep schedule is “awful.” After going to bed at 4 a.m. on the morning of June 2,  he was woken up at 11 a.m. by a call from his equity advisory mentor, Karen Waters-Wicks.

She offered him the opportunity to attend Governor Ralph Northam’s first press conference since protests began in Richmond and other cities across the country; an event that would be broadcast statewide. Even though he would have typically still been in bed, Perry accepted the invitation and was able to make it to the 2 p.m. event.

After meeting the governor and his administration, Northam asked him if he wanted to speak; however, Perry declined the offer, intending to simply be present on stage.

He was then asked again, this time by Chief Diversity Officer for the Commonwealth of Virginia, Dr. Janice Underwood, if he wanted to say some words, and this time he changed his mind.

Although he had just woken up a couple hours prior and hadn’t had anything to eat or drink yet, Perry went up to the podium and spoke to all of Virginia, with nothing memorized or rehearsed, just speaking directly from his heart.

“We are the future. Our voices need to be heard and we need to come together now more than ever.”

During his time with the cameras on him, Perry directed his comments to any kids that were watching and sought to connect with others in a position similar to his.

Although his remarks were concise, Perry’s words stood out, as later on in the conference Northam himself said, “I think it was well stated by our senior [sic] in high school that they [the youth] are our future… I admire [his] courage to stand up here and make it clear that we are here to listen to the young people.”

The next day Northam called Perry and reiterated how he admired him.

“It felt like I did something good and that my message was clear, even in those 52 seconds that I spoke,” Perry said.

He quickly found that his words were heard by more than just the governor.

“As soon as I got done talking I had my phone in my pocket and it wouldn’t stop vibrating and I was so anxious to see what everyone was saying. I just got so much love and support.”

The praise didn’t stop there, as Perry said that when he opened his email after the event his inbox was filled with Albemarle faculty members who congratulated him on speaking.

As one of four AHS representatives on the county’s Student Equity & Advisory Team (SEAT) committee, Perry plays a role in getting the ACPS community to be more actively anti-racist.

One way that the committee recently did this was by hosting a Zoom meeting on May 23 that focused on how COVID-19 unequally affects different segments of the community. Perry considered the meeting to be a success, citing a good turnout and a general conversation that went better than most in-person town halls.

One of the panelists for the town hall was Dr. Underwood, and Perry emailed with her after the event, putting him on her radar.

When it comes to Albemarle students who want to make a change, Perry feels like there is no time like the present.

“Now is the perfect time for everyone to speak. We have years of oppression and injustices against blacks and minorities in general. I feel like some people are always quiet about it or don’t really want to get involved, but that’s not going to help anything anymore.”

For those who are seeking change on a local level, Perry said that using one’s right to vote is the best thing that they can do in order to make a difference. If someone won’t be old enough come Election Day, then he says they should get all their friends who are old enough to exercise their right to do so.

Perry also highlights that, although they don’t get as much attention in the news, local elections are key. For many, whoever they choose as their mayor or police chief will have a larger impact on their lives than national roles like their senator or even the president, a fact that plenty of voters overlook.

Even though he won’t be old enough to vote this year, Perry still continues to focus on the youth movement that he sees before his own eyes.

“Now is the time when we need to put our grown-up pants on and speak up for what’s right. We can’t be blinded by what’s going on in the world and be silent about it.”