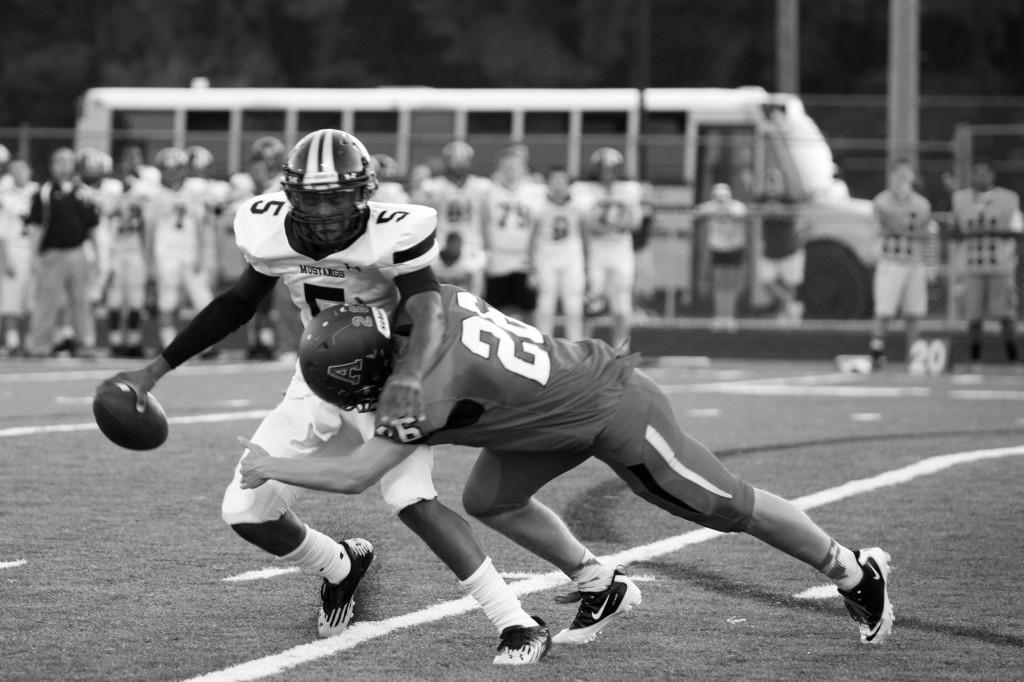 Senior linebacker Eli Mackay tackles the Monticello Mustang quarterback in the backfield during the first Albemarle home game on Aug. 31.

With a 1-5 record at press time, the Patriot football team is working towards beating last season’s record of 3-7.

According to head coach Mike Alley, the quarterbacks have been forced to throw deep because they have to make last minute plays and hope that their receivers are there. “We’re going to try to keep the score a little tighter so the quarterbacks can play the game they’ve practiced,” Alley said.

The team began summer practices with high hopes. “Our team had a very good off season this past summer; we had on average 50 players coming out for pre-season practice,” Alley said, adding  that many players have stepped up as leaders this year.

The players feel that the team’s sense of unity is one of their strengths. “Honestly it’s an honor to know that my team mates trust me enough to be a leader in the football program,” Troche said.

The this strength propelled the team throughout the season. “I encourage the team by keeping them focused during practice and positive about the rest of our season,” Mackay said. “We have improved team unity. Almost everyone is more positive and committed.”

Alley feels that the first half of the season was against tough teams, and thinks the playing field will be more level in upcoming games.  “You never know how tough the Commonwealth teams are going to be, but one thing I do know is that we will be competitive,” Alley said.

The team feels they have kept their confidence high throughout the season. “I feel that we are capable of doing great things,” Junior linebacker Jordan Shelton said. “We have the effort on and off the field and will use that on Friday nights.”

“We have played some good teams and are looking forward to the second half of our season,” Mackay said.

The team will continue to push through the season. “We have played hard in every game and we can most certainly beat a lot of teams in the District if we keep playing as hard as we have been playing,” Willy said.

The team has also spent time watching footage of themselves in order to improve their game.

Alley is hoping that this will help  lessen the turnover ratio and decrease the amount of fumbles.

Another problem that has plagued the Pats is the injury to sophomore quarterback D.G. Archer’s ankle that has forced him out for the season.

“Anytime someone is injured on the team, the [whole] team is affected,” Alley said.

The team will go on to play five more games this season.  “Our plan is to keep on working, to play four quarters every game and execute when we’re given the opportunity,” senior lineman David Chapman said.