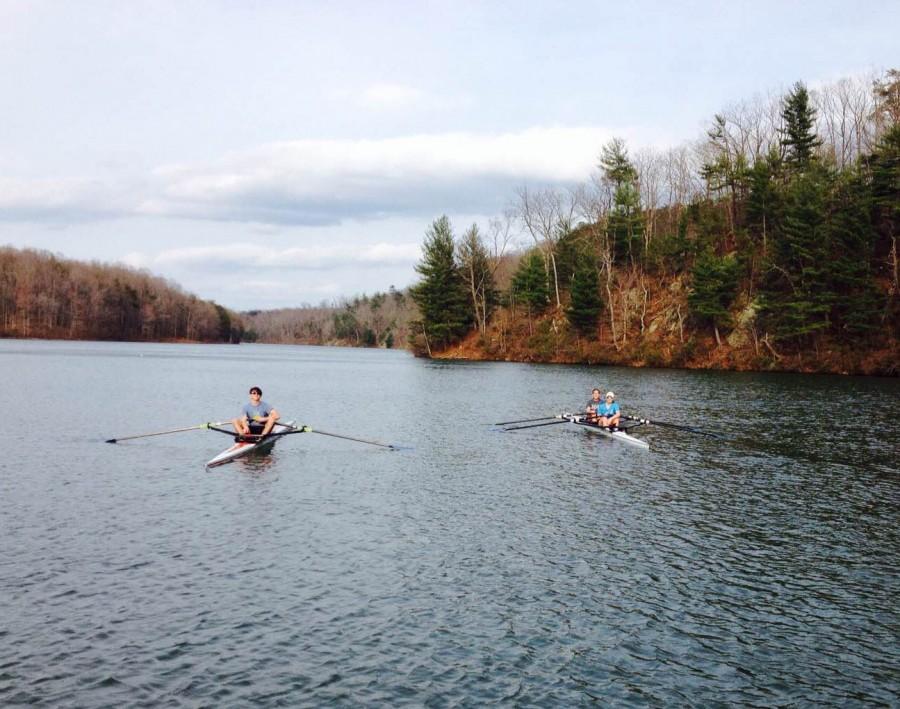 As the spring sun melts the ice of winter off the reservoir, the AHS rowing team heads down to the boathouse to begin their season.

Formed two years ago, the team has quickly built up the program, almost doubling in size each year.

“We had six people our first year, last year we had 12 and now we’re up to 20,” senior Hannah MacKnight said. “We have lots of seniors, all the way through freshman, so it’s not concentrated mainly on one grade. And we’re pretty balanced boys and girls; when we first started there were only two girls so it’s pretty exciting.”

“It makes me happy to see so many people begin to love getting on the water, breaking PR’s, and taking part in the sport I love,” junior David Braatz said.

The team technically rows for Rivanna Rowing Club, but includes nine boys and eleven girls from the AHS district, plus a coxswain that practices with the team several days a week.

“[Coxing] is much different than being an actual rower,” junior Katy Creighton said. “Coxswains don’t need to know as much about the technical side, instead they need to know how to maneuver boats effectively and be attentive to what is happening in and around the boat.”

Creighton became involved in coxing as soon as she found out about the rowing program.

“I talked to the coach and was welcomed on the team over the summer,” Creighton said.

“The first full year of our history we were rowing with Western out at Beaver Creek Reservoir, and then last year in 2014 [when the team began to grow], we moved our operations to Rivanna Rowing Club, which is UVa’s boathouse,” head coach Cathy Coffman said.

They practice five to six days a week and race several quads, doubles, and single boats in regattas at Occoquan Reservoir on the weekends. Last year, the men’s quad won states and a women’s double won third at nationals.

“It takes a lot of mental stamina for a race piece because you’re basically sprinting for six minutes, so you really have to focus on your goal,”  junior Lydia Eisenberg said. “Also, competitiveness. You see another boat next to you, and you want to beat them. And if you don’t have that drive, you won’t be able to win a race.”

The technique needed to row seems simple and repetitive, yet is next to impossible to master. Contrary to popular belief, it involves all parts of the body, focusing mainly on the legs, but including the back, core, and arms as well, creating a physically invigorating challenge. It also takes a certain mindset to be able to get through a race or workout without stopping.

“Being a rower requires dedication, passion, pain tolerance, and a desire to win,” Braatz said. “You also need to be a good listener, because our coaching staff is the best in the state and our key to winning regattas.”

“It takes a lot of drive. You have to be willing to come out every day and push yourself through things you could never imagine pushing yourself through before. And physically, it’s a lot of work, but it’s completely worth it,” MacKnight said.

A typical practice for the team includes cardio, weight lifting, and rowing on the reservoir.

“We warm up by running hills and doing arm pulls. Then we get on the water for about an hour and a half, and after we get off we do a little more running or lifting, depending on the day,” Coffman said.

In the winter months, the team trains indoors on erg machines, and focuses heavily on form and technique.

“It’s more long distance, like we’ll do 20 minute pieces and 5ks in the offseason. We train pretty much everyday,” Eisenberg said.

Although the season is already in full swing, there is always an opportunity to try out for the team next year.

“Get in shape now, do Rivanna’s “Learn to Row” program this summer, so when you come out next year, you’ll at least know the basics and have a little bit of skill because it’s a lot to learn really quickly,” Coffman said.

“You should give it a shot, even if you think it looks easy, or if you think it’s really hard; it’s a little bit of both, but it’s really fun so it makes up for it,” MacKnight said. “It builds you up mentally, physically, emotionally, and you meet a lot of new people. There are so many benefits.”