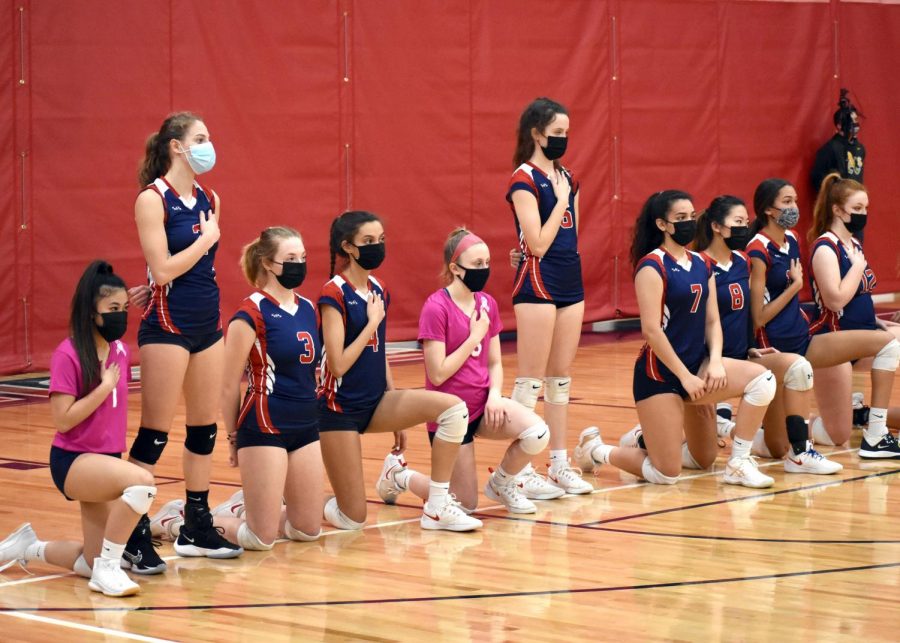 The varsity volleyball team kneels during the national anthem before their March 23 game with Louisa.

Despite potential backlash, a majority of the varsity volleyball team has been kneeling during the national anthem at home games in wake of recent local school and national events.

“It’s been something on my mind for a while, ever since Colin Kaepernick took a knee during a football game; it’s always something I’ve looked up to,” senior middle Olivia Deepak said.

National conversations became local when rumor of a WAHS football player using a racial slur against an AHS player during the March 19 game began circulating in both schools. Each building’s administrative team is currently investigating the alleged incident.

“Finding out that someone on our rival team, Western Albemarle’s football team, could have potentially said a racial slur towards someone on our own team, that’s when it really felt personal, and we should all get together and talk about it and do something,” Deepak said.

“With everything that’s going on right now, if we feel like the national anthem isn’t something that completely represents us, then I fully think it’s something that we shouldn’t be required to stand for,” junior right defensive specialist Julia Niehaus said.

“We’re really falling short of the life part of the declaration of independence (life, liberty and the pursuit of happiness). So many people have lost their lives, and they’re now not able to speak up for what they believe in, so I think it’s my responsibility to do my part in speaking up,” junior outside Maya Winterhoff said.

The team hopes that media coverage and attention from rival teams and families will help to educate others and, “build unity and a stronger community,” Niehaus said.

Over the past few years there has been an increasing number of people kneeling in protest for the national anthem, though not all experienced backlash like Kaepernick.

“I was a little bit scared of the repercussions. I mostly was just concerned for what some other parents in the stands and what opposing teams would think,” Niehaus said. “The more I thought about it, the more that I realized that…if it’s what I believe in, then I shouldn’t have any other reason to think that I shouldn’t do it.”

The lady Patriots feel that they have succeeded in their mission if conversations are sparked.

Winterhoff said that she knows the team’s action isn’t going to solve racism, “but until you find a better solution, I’m going to keep kneeling for the national anthem.”

One Response to “Taking a Stand Through Kneeling”