Ever since a Facebook post announcing Ginny’s diagnosis, friends and peers at Albemarle have been showing their support for Bruno and her battle.

The Power of Purple:

-Purple has been Bruno’s favorite color her whole life

-Purple is the color for epilepsy awareness

-Purple is the color of JMU, her future college 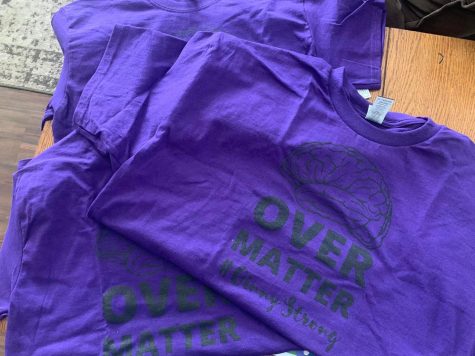 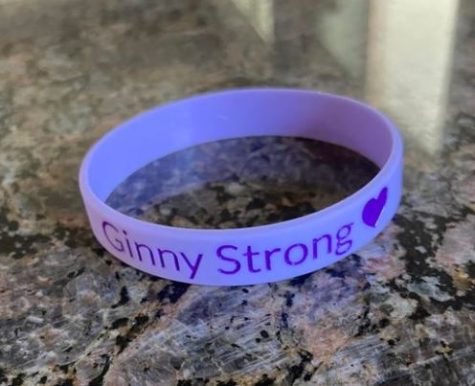 #GinnyStrong t-shirts and bracelets (shown above) were sold in the color purple to help raise money to aid with hospital bills.

When Bruno woke up from surgery, she claimed purple as her recovery color.

The color immediately spread around the school and people began showing support to Bruno by wearing purple clothing, purple ribbons, and even purple #ginnystrong bracelets.

Most touching was when the AHS jazz band surprised Ginny with purple ties at their assessment performance.

“We wanted her to still feel like a part of the group and not like we were moving on without her,” band director Andrew LaPrade said.

“I am astounded by the love and support I received from people I barely even know,” Bruno said, “that is what has kept me strong and allows me to still feel like a part of the school community even from home.”At times, however, Bruno has felt overwhelmed by the attention.  “I am just a person too and I don’t want anyone, especially people that have gone through similar things, to feel like they are any less important.”

Bruno said it is hard to describe to others what she is going through. Since seeing her in public, many people have assumed that she is fully recovered while, really, Bruno has just begun her battle.

Over-stimulation has been Bruno’s biggest struggle since her surgery. “When I get overstimulated my ability to speak goes out the window,” Bruno said.

LaPrade recalled her first time back in the school building: “She went to go talk to a bunch of friends who had missed her, and then, all of the sudden, couldn’t make a cohesive sentence. I was scared that something we had done in band had caused it.”

Steadily, Bruno has been building stability and stamina, learning to recognize signs of fatigue before reaching burnout.

“My brain feels like a phone that’s dying. Then I plug it in.”

While struggling with medication-induced insomnia, Bruno has dedicated much of her time to Bible studies and spiritual reflection.

The beginning pages of her Bible study journal are scratched with shaky words that took immense concentration to put on paper. More recent pages are filled with a beautiful and strong script providing an outpouring of spiritual thoughts.

Her brain tumor has also allowed Bruno to spend more time with her family as they take care of her.

“I used to go through the day feeling like I was trying to fit 26 hours into a 24-hour day. Now I have learned the importance of taking care of myself and allowing others to take care of me as well.”

Despite still needing help with everyday tasks, Bruno has made strides in taking back control over her life. Managing her appearance has been one of the most attainable ways for her to achieve that.

“I have had these moments when I look in the mirror and hyper focus on everything I see,” Bruno said.

Initially, Bruno had hair missing where it had been shaved for surgery and lost a good amount from medications. Now it is starting to grow back and get curly again which has boosted her confidence in her appearance.

“This is what healthy looks like for me and I need to remember that I am beautiful.”

Prior to surgery, Bruno loved bold eye makeup. When her aunt brought over purple eyeliner and mascara a week after coming home, Bruno jumped at the chase to put some on. Her hands shook with neuro tremors as she tried to apply the color to her lids. “Even the littlest bit made me feel so much more like myself.”

Bruno has felt defined by her brain tumor. “My dad and I joke about it now,” Bruno said. “We refer to the brain tumor as my Boo Boo to make it seem less scary.” But Bruno is trying to shake the reputation as “girl with the brain tumor” and replace it with musical achievements.

Bruno will always have physical reminders of this experience; scars from needles on her wrists and the incision in her head, but channeling her pain into her music and faith has kept her grounded and given her an outlet for emotions.