Looking to the Future

Since the performance, Bruno has continued to perform with the jazz band and build stamina for schoolwork.

She attended senior prom where she won prom queen.

As Bruno regains her independence, her parents have been able to go back to working more often. The financial burden for the surgery and the medical assistance to come is immense, especially as Bruno is preparing to leave for JMU in the fall.

Bruno and her family have been amazed by the generosity of their community, both financially through a go fund me account, a meal train, and other thoughtful actions during the brunt of the recovery process.

“So many people took care of me and showed me support when I needed it most, even people I wasn’t close with. I will forever be thankful for them,” Ginny said.

Although her initial plan was to march with the JMU Royal Dukes, alto saxophone is now too dangerous for Bruno to play due to the pressure it can build in her head. Despite this small setback, Bruno is excited that she still has the opportunity to sing with the JMU jazz band. She has already begun working with future peers to assemble a list of songs to sing with them next year.

In between band and schoolwork, Bruno has been in and out of the hospital for checkups and preparations for the next steps in reducing or removing the tumor. Bruno and her family have decided to go through with gamma knife radiation, a non-invasive procedure UVA hospital offers. The procedure will be taking place every morning at 5 a.m. the week of May 22.

Over the next days, months and years, Bruno will continue her fight against the brain tumor, her “booboo.”  “I look to God for strength in my future and have faith that I am more determined than the tumor is.

I have grown so much from this experience that I wouldn’t change it even if I could.” 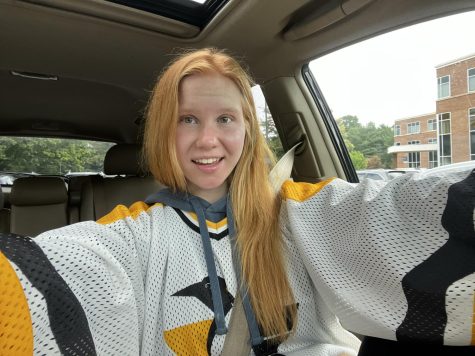 Eavan Driscoll is a Senior at Albemarle High School in Virginia. She is a captain of the field hockey team and plays lacrosse in the Spring. Eavan loves...