“I eat cereal out of wine glasses.” The Mindy Lahiri Story 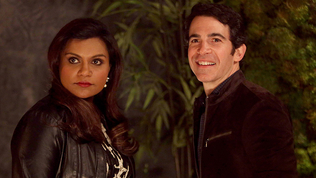 With the appetite of a 300 pound lineman or Paula Deen, and a love for overpriced throw pillows, I could almost call Mindy Lahiri my unbiological twin sister. Mindy, the starring character in the self-entitled show The Mindy Project, is a partner and OB GYN in a practice in New York City and carries herself with confidence and brightly colored clothing.

Along with her co workers, Danny, a rugged and arrogant Catholic, and Jeremy, a well dressed British fellow with a love for his watches and women, she navigates through social and professional matters.

When I first saw this show, I had just purchased a free trial on Hulu so I could binge watch the Kardashians, and sure enough, I found a show even more entertaining and somewhat more wholesome.

Instead of viewing enviably gorgeous women trying to figure out which pearls they should wear in their “nude photo shoot”, or getting married for 76 days, I was watching a much more realistic show. This show does not portray “perfect” women, and shows that everyone can make mistakes along the way, but can still approach them with humor and learn from them.

Whether she is hiding Milky Way bars up her sleeve when she’s being forced to eat healthy, or getting wasted at an ex’s wedding and diving into a pool, Mindy doesn’t stress over her mistakes, but looks back humorously and moves forward. As she would say,  “Kim Kardashian started out with a sex tape but she didn’t let it define her. So I just need to ride out this minor humiliation until I find my Kanye.”

Even though some of the men she dates may be solid 5’s, Mindy is a confident and feminist person who never lets anyone lower her self esteem, no matter what they say.

“I’m like very smart and successful, and I’m hot, but I don’t even know it, which makes me even hotter,” she says. Mindy Lahiri promotes confidence, being yourself, and not caring what anyone thinks.

If you are on a date and want to eat a giant burger, don’t care if your date is a “die hard vegetarian” or thinks “burgers are too manly. ”If you want to be a rapper, don’t listen to people who tell you that “you’re not gangster enough.”

If people ridicule you, tell them that this isn’t the 1900s, when women had to fight to vote and raise bratty children as a career. This is 2015, and we shouldn’t care what anyone thinks if we eat a dozen donuts on our own, if we want to wear a banana costume in public, or sit in sweatpants and binge watch Netflix instead of work on our AP history outline. Also tell them to watch the Mindy Project, because no one promotes being yourself better than Mindy.

“I eat cereal out of wine glasses.” The Mindy Lahiri Story