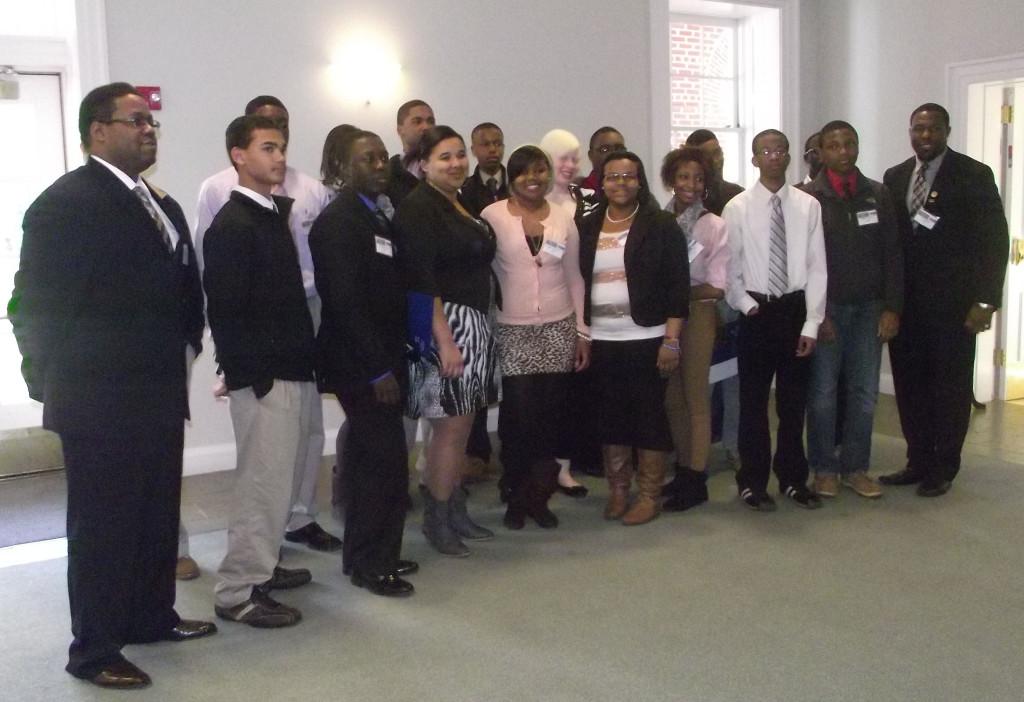 The African American Scholars Alliance joins for a group picture at the Darden Business School at the University of Virginia.

On Feb. 1, the African American Scholars Alliance took a field trip to Darden Business School at University of Virginia.

Ranked as the third best business school in the world, Darden hosted AASA clubs from Monticello, Western, Charlottesville and Albemarle high schools. The curriculum for the day included several panel discussions, a mock trial where the students analyzed a case study, and an elaborate lunch in the spacious dining hall.

The African American Scholars Alliance “is a group of high-achievers and leaders in the school,” club co-leader Wendell Green said, “the club provides enrichment opportunities for [the members] to grow as students and individuals.”

The club contains 20 African-American students, all with 2.9-4.0 or higher GPA’s. Although the club is all-inclusive, “It’s really to show African American students that we care about them and that we believe in them,” club co-leader Wes Bellamy said.

This is the third field trip for the AASA this year, after visiting the UVa Law School and Virginia Tech engineering program.  “We really want to give the kids exposure to different things,” said Bellamy, “we want to show them this is something they can achieve, that they can be just like the people they see in the programs today.”

The Secretary of the AASA, junior Richard Boamah said the club has fulfilled it’s goal in that respect. “AASA has given me the chance to learn more about college by talking and interacting with college students. I have also been able to lean more about other fields of study.”

Upon arrival, Dean Robert Bruner greeted the students by breaking down the field of business. He explained what it takes–degrees, passion, and a general interest in finance–to succeed in the world of business. “You are the future of the world,” Bruner said, “and I can’t think of a better way for us to spend our day then to spend it with you all.”

The over-laying theme of the day was titled “Leap of Faith,” which Associate Director of Admissions Kellie Sauls described as, “this feeling, this belief that you have in your gut, this instinct you have that is not necessarily taught” in reference to what it takes to pursue something the students, as individuals, love, even if they aren’t sure where it will take them.

The Leap of Faith discussion transformed into a description of what it really takes to not only be in business, but to chase passion, whatever it may be, into an enjoyable and successful future, “You can’t just rely on what you’re taught in class, sometimes you have to act on that gut instinct because you know if you don’t you’ll miss something,” Sauls said.

During the first panel discussion, each panelist described their life before their Leap of Faith. As each panelist discussed their path, it became evident that they had all had their slip-ups. They weren’t all straight-A students, several came from impoverished backgrounds, and during high school, none of them knew what they wanted to be, they simply knew what they loved. “I don’t want you to think you have to have it all figured out by now,” said Chief Operating Officer of Hartford Public Schools Victor De La Paz.

But what about those who aren’t so daring? What about those who don’t have the courage to make that Leap of Faith, wandering into unknown territory with the possibility of failure? “I did the math before I made my Leap of Faith,” said Founder and Chief Executive Officer of LendStreet Jerry Nemorin. “I discovered that if you fail once [at your dream], you can always do it again.”

“I was inspired while listening to the speakers talk about their work experience and the critical choices they made regarding the option to further their business education by quitting their jobs on Wall Street,” said Boamah.

After the “Leap of Faith” panel, students filed into a large circular room where Professor Gregory Fairchild began to moderate the case study. The students read about the “No Child Left Behind Act” and evaluated it thoroughly. The energy level stayed high throughout the trial, Professor Fairchild keeping them on their toes with a constant firing of questions. Fairchild gave the students a brief overview of what it takes to create a stable business and earn a profit from it.

One student in particular, freshman Ky Millner, spoke up at every opportunity. “I feel like I’ve learned a lot about getting a business degree. I think I’ve met a lot of people today that I might be talking to in the future,” Millner said.

Boamah said that the field trip inspired him because “it showed me that if you’re willing to go the extra mile and put the work in you can accomplish great things.”

Darden Business School offered insight into the world of business and allowed students to get a feel for their place in the working world. “It’s a matter of taking your passion and turning it into a profession. It’s all a matter of believing in yourself,” Nemorin said.