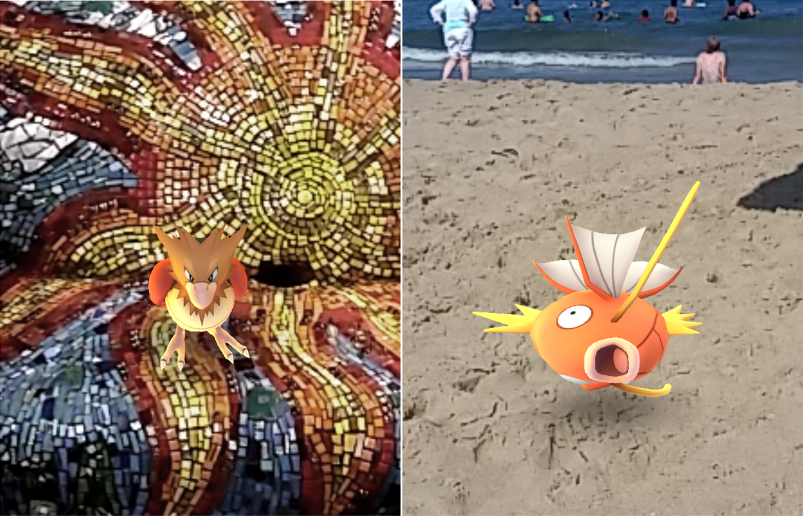 Pokemon Go. Chances are you’ve already heard of it, downloaded it and caught your first of many Rattatas waiting for you in the front yard.

The new mobile game is the result of a partnership between software developer Niantic, Nintendo, and the Pokemon Company to make a fully immersive, mobile Pokemon game unlike any other in the series.

Pokemon, in case you’ve never heard of it, is an internationally popular Japanese game series that started in 1996 and has now built up 122 games, an animated television show, and 19 movies. Pokemon is an abbreviation of “pocket monsters” and refers to small fantasy beasts meant to be collected.

In Pokemon Go, you make an avatar that travels right alongside you in the real world via Google Maps, catching pokemon and fighting at local Pokemon gyms. Churches, public works of art, sponsored businesses and landmarks are marked as Pokestops where players can collect supplies and experience points in the game.

“I love how it’s so interactive,” junior Molly Flanagan said, who’s played Pokemon video games since middle school. “I have to actually walk around my actual world and battle other real people instead of just looking at my DS screen.”

The game immediately took off, gathering 10 million downloads on Android users alone within its first week and becoming the most popular smartphone game in U.S. history.

The app generates approximately $1.6 million a day according to SensorTower, a business that gathers data on mobile applications. Pokemon Go gathers more runtime within its users than Whatsapp, Instagram, or Snapchat with around 43 minutes of playtime on average daily.

Pokemon Go has definitely had one of the most successful launches in video game history. Take a look around Charlottesville’s very own Downtown Mall, which contains a cluster of Pokestops, and see players of all ages walking in circles, staring at their phones and stopping mid-step to catch a pokemon. Drive through town late at night to spot players hunting rare Pokemon that only appear during certain hours.

The game requires its players to go outside for pokestops and rare pokemon while also rewarding players for walking long distances. Users say that the app has inspired them to exercise and experience nature voluntarily.

“It’s made me feel like I actually have a goal and a reason to do stuff and less like I’m wasting my life away,” Flanagan said.

Another avid Pokemon player, senior Hunter Lee, has been a fan of the franchise for as long as she can remember and thinks Pokemon Go has done a lot for her in terms of health. “I usually spend my summer inside, but it has made me more active,” Lee said. “I’m outside for most of the day.”

Pokemon Go also has a social aspect. Players have organized meetups, group marches, and Pokestop runs. When tracking pokemon, it’s not uncommon for two trainers to stumble upon each other and even become friends.

“A group came up and it seemed at least 20 people were there, just traveling around playing this game,” senior Luis Lawson said. “So of course I decided to approach them and I made friends with a few in a way that you couldn’t find from any random event… no game has been able to do something so social.”

However fun and exciting Pokemon Go may seem to some users, certain safety concerns have risen since the game’s release. Players are willing to literally walk through busy traffic or drive on speedy highways while staring at their phones.

In Los Angeles two men fell of a cliff while playing, suffering moderate injuries. In Wyoming, a teenage girl found a dead body during a Pokemon outing. A mass of players across the country have been arrested for trespassing while tracking Pokemon.

“A lot of the problems are from people who aren’t looking up from their phones while they play,” Lee said.

“I lost my mom in Target because she kept walking,” Flanagan said. “I also once forgot for a couple of seconds to move out of the road.”

To insure the safety of its players, Niantic has stated that bi-weekly updates aim to fix server issues and add new features to the game. Since the game’s release, Niantic has added messages that warn players to refrain from driving or trespassing when playing.

Pokemon Go will keep growing and changing in the near future to create a unique and entertaining experience for Pokefans everywhere. You can download the app for free on your phone right now; just remember to look up every now and then.