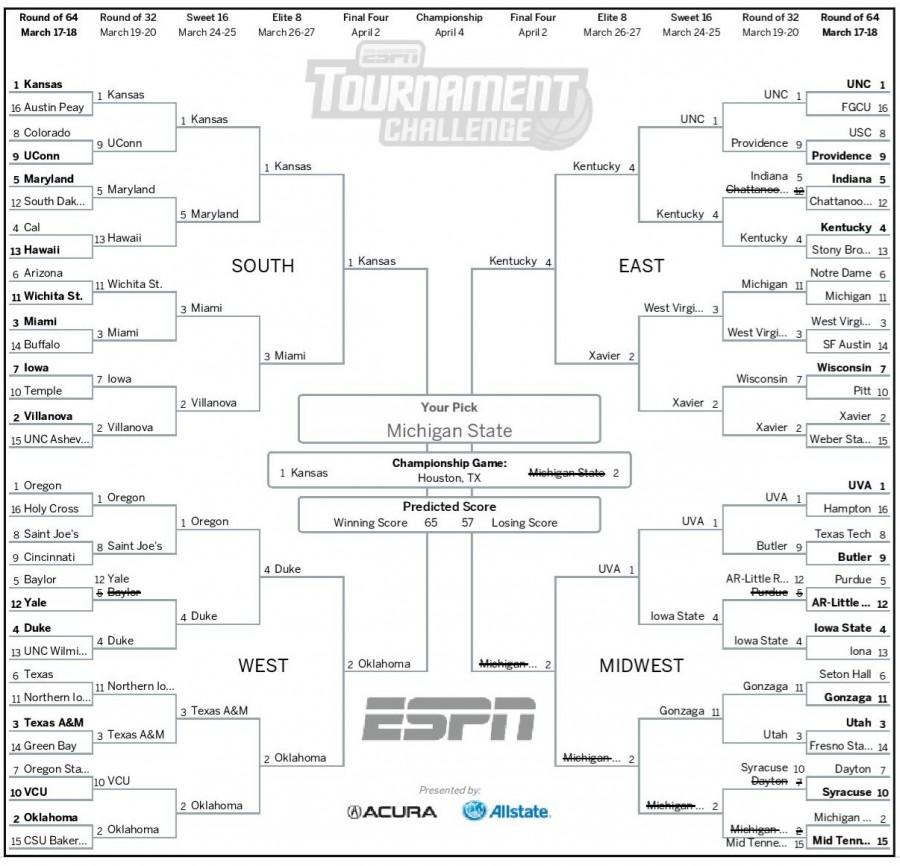 March Madness is upon us again, as millions of us scramble to make brackets that will surely be “destroyed” or “ruined” after the first few games. I’ll take you through my bracket. Which has already been destroyed.

Some upsets I have picked are Hawaii defeating California, Wichita State beating Arizona, and Northern Iowa beating Texas. I had Cal going to the Sweet 16 before I learned their leading scorer Tyrone Walford, had a fracture in his hand, keeping him from the game. As for Wichita State, they’re just a team I can’t bet against due to their success in the tournament in recent years.

Most people had their brackets destroyed when Yale defeated Baylor and when Purdue lost to Arkansas-Little Rock. Those games didn’t hurt me too much considering I had both teams losing in the round of 32. A lot of people were also surprised with Gonzaga defeating sixth seed Seton Hall. I chose Gonzaga in that one essentially because I had no idea who Seton Hall was and I figured Gonzaga was the right move.

I picked the south region perfectly not missing a single game.

I had Dayton over Syracuse which turned out to bite me, even though I didn’t have Dayton advancing to the Sweet Sixteen. I pick Dayton to win every year and they usually play well in the tournament, however they got destroyed by Syracuse in a 19-point loss.

Even with my champion Michigan State losing in the first round all hope is not lost for my bracket. I’m confident that Kansas, Oklahoma and Kentucky will all be in the Final Four. UVA will more than likely take Michigan State’s place. If that is the case Kentucky will defeat UVA, UVA will face post-season jitters while the experienced Kentucky unit will cruise to the NCAA Championship to face Kansas, simply a better team than Oklahoma.

The championship will be a good one, Kansas versus Kentucky has always been a classic. This one will come down to who can establish and maintain the tempo of the game. I think Kansas will pull this one out in a close 75-71 win. It will be a back and forth game for most of it with Kansas pulling away in the final minutes.