Alum’s Curiosity takes him to Mars 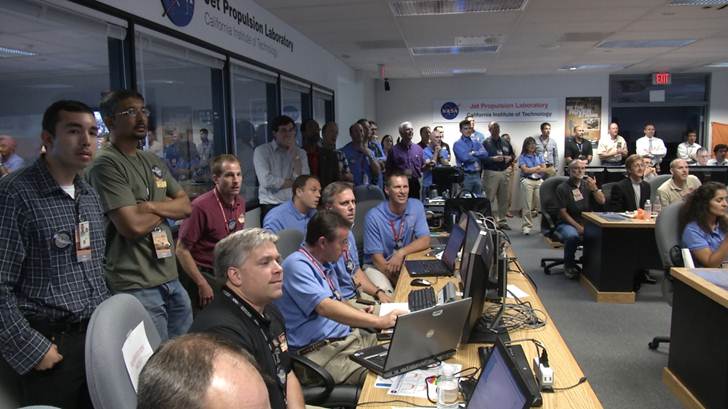 Class of 1988 member Jeff Herath (center, wearing a black shirt) watches Curiosity’s landing during the “seven mintues of terror” on Aug. 6 in Mission Control at Jet Propulsion Laboratory in Pasadena, California. The NASA engineers are watching screens that show the telemetry of the vehicle indicating its status.

In August of 1953 Albemarle High School opened its doors for the first time. Many things have changed in the past 60 years. This year the Revolution will be interviewing alumni to look back into AHS’ past and look forward into the future.

When the Mars rover Curiosity made headline this summer, an AHS alumnus was in mission control during the “seven minutes of terror.” Jeff Herath, class of 1988, is the head of the atmospheric flight and entry branch of NASA in Langley, VA.

“It was a wonderful feeling of camaraderie and anticipation,” Herath said about his experience in mission control. “We had all worked for years for that night to be successful.”

Hearth was tied to the rover in three different ways.  The first was through his development of Radiation Tolerant Intelligent Memory Stack (RTIMS), which records data and sends it back to earth. Herath and fellow NASA engineer Tak-Kwong Ng created the RTIMS that can hold one billion bits of data and controls the “ChemCam” which shoots laser beams at rocks in order to collect information.

The second way Herath was tied to Curiosity is as the chief engineer of Mars Entry, Descent, and Landing Instrument (MEDLI), which controls how the rover gets through Mars’ atmosphere. He was also in charge of the simulations of getting the rover from Earth to Mars.

Herath credits the start of his success at NASA to AHS. While Herath was a student he participated in local and national science fairs, most of his projects dealing with aerospace. His senior year his project was a solar powered remote control airplane, that earned him honors at the International Science and Engineering Fair.

“Mr. Wayne and I traveled to San Juan Puerto Rico for the International Science and Engineering Fair in 1987.  When checking in at the fair they gave me the teacher’s packet and Mr. Wayne the student packet (he looked much younger then).”

“I remember being blown away with the quality of the projects from the other participants,” Herath said.

Physics teacher Tony Wayne remembers traveling to the Space Flight center with Herath. “We both had a keen interest in everything nerdy at Huntsville. I do remember a lot of ‘ooh’s’ and ‘ah’s’ as we toured the buildings.”

Wayne and recently retired chemistry teacher Marv Curry were Herath’s advisors on his science projects. “If it wasn’t for their encouragement and faith in my projects, I probably would have never entered those fairs,” Hearth said.

“Jeff was a diligent, bright student with a good sense of humor,” Wayne said. “I remember discussing several iterations of his science fair project as she was working on it and thinking, ‘How’s he going to pull this off?’”

“My high school experience was a very good one, of course you have good and bad days, but all in all it was good,” Hearth said.

Herath does not believe that AHS in the late 1980’s was very different that AHS today. Students still hung out in the breezeway and enjoyed socializing.

However, prior to 1986 AHS did not have a wrestling team. Herath joined the team its inaugural year and was a captain by his junior year.

“I wanted to be more active and felt I was pretty good at wrestling my cousins,” Herath said. “So of course that meant I would be a good wrestler, right?  Well, it was a lot harder than that, but I eventually started winning matches.”

Herath’s advice for anyone interested in pursuing a career at NASA is to show that they are a self-starter, take on responsibility and carry a project through to the finish.

“When I am interviewing someone for my staff, I look to see if they have a go-getter attitude and if they have the ability to problem solve.”

Reilly McCann is a junior at AHS. This is Reilly's first year on the newspaper staff. Reilly enjoys writing stories about sports and student life.

Alum’s Curiosity takes him to Mars