The Gelnovatch’s Go for the Gold 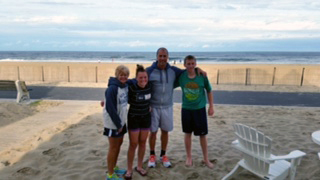 “I was raised with tremendous athletes. Both my parents are high level athletes and my sister and I as well. It’s really cool to achieve what they have achieved as players and coaches. I hope to do the same when I’m older,” junior Jake Gelnovatch said.

The Gelnovatch family’s typical day is filled with soccer practices, workouts, and a focus on developing skill and talent.

With the UVA head soccer coach for 19 seasons as a father, and a mother who was a field hockey national champion in 1986 and previous head coach for UVA field hockey, this family has an abundance of athletic abilities.

Jake and Sunny Gelnovatch, both juniors, have been playing soccer since they were in kindergarten and are now top in their division.

Midfielder Sunny is ranked eighth in the nation in the 17s division by the US Soccer Club. “It’s an accomplishment, but I’ve figured there’s always room for improvement; there’s stuff I can still work on,” she said. “I had my practices for four days a week for an hour and a half, but I do stuff on my own on my off days. I would train for about six or seven days a week.”

Jake has also achieved a national ranking as the number four goal keeper in the 18 year old division, according to US Soccer Club. “I hope one day to be number one eventually, but I’m really happy right now,” Jake said. “I’m proud of the amount of work I’ve put in and I deserve it because I’ve put so much work into it.”

With their level of skill, the Gelnovatch siblings have accomplished  quite a bit in their soccer careers. Jake represented the U.S. in the Under-17 nationals competition in 2013. Sunny was called into the U.S. Training Center and was invited to the Nike IDQ Camp in Phoenix, both elite opportunities.

Their parents, George Gelnovatch and Missy Sanders, also have an abundance of accomplishments to be proud of as well. George has been playing soccer since kindergarten and has been UVA head coach for 19 seasons.

“We [Wall High School, Wall Township, NJ] won four state championships and as a player that was pretty cool and I was part of three of them,” George said. “When I played in college [UVA] we won a couple of ACC championships. I had a lot of really exciting games against teams like Duke, Maryland, and UNC. Some of those games were really memorable for me.”

After his success on the field, he began coaching at UVA in 1989.

“In season, I leave my house at about 6:30 a.m. and sometimes I get home at about 6:30 p.m. In the afternoon we do a lot of things like scouting reports and video on opponents,” George said. “We prepare practice for the next morning so were organized. We do that like six or seven times a week.”

His wife, Missy, has been playing field hockey since she was in elementary school and was the previous head coach of women’s field hockey at UVA.

“In the summer, when I was in college, I would do camps to make money. So I traveled all around the country to do weeks of camps and earn money during college,” Missy said.  “Then I graduated from college, became a graduate assistant coach, and got my masters degree. Then I became an assistant at Maryland and the head coach at UVA.”

She led UVA to two NCAA final fours and the finals in the ACC championship.

Before her coaching days, Missy dominated on the field when she played for Iowa. “My favorite accomplishment as a player was national championship in 1986,” she said.

Missy quit coaching to focus on her family, but continues to train athletes: her children. She instilled a love for sports in both of her kids.

“It’s [sports] not like something we have to do, it’s something we want to do. A lot of times as a family I’ll go work out with my brother, my mom will put me through a workout,” Sunny said.

The Gelnovatch’s Go for the Gold