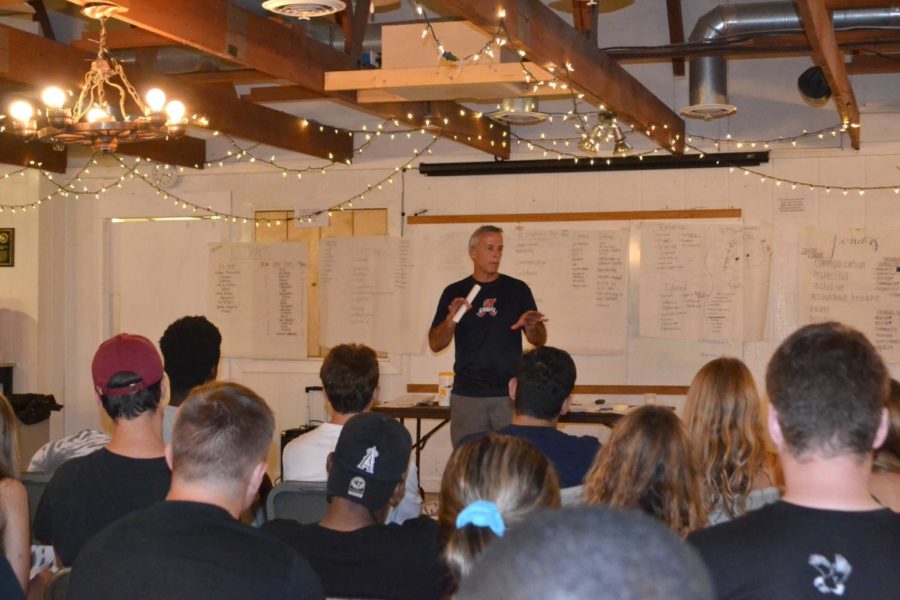 College? – Community College at Virginia Western, transferred to JMU where he actually didn’t get a degree in education at all. Then he went back (to JMU) and got certified to teach, and then got his master’s at George Mason. In terms of his college athletics allegiances, he considers himself to be “a Duke more than anything else.”

Favorite C’ville memory? First is the birth of his second child, but he also “values the community, where we are in relation to nature, and the aesthetics of the area.”

Dream Job? (besides being a principal) – “Even though I grew up playing football, I loved baseball more. My grandfather always thought he would have one of his grandsons playing in the major leagues, so I would say maybe a 1st Baseman for the Atlanta Braves.”

If you were stuck in an elevator with one person, who would it be? Martin Luther King.

Early Super Bowl Prediction? “AFC side, I’m taking the Patriots. NFC… I would go with the Rams, because I think they can get back there from last year.”

There’s been a new sight around AHS this school year in the form of a defining motto. Visible mainly on the back of teachers’ shirts, Together We’re Better ’is the phrase that new principal Darah Bonham is bringing with him, saying that it epitomizes his intentions within Albemarle’s community.

In his 14 years with ACPS, Bonham has seen a lot. He’s been a man of many roles in the school district, starting with his time at CATEC, then being an Assistant Principal at Monticello, which was followed up with a stint as Western Albemarle’s Principal and resulted in his current position in the same role at AHS.

When it comes to his reasoning on why he wanted to pick up his stakes in Crozet and move to Albemarle, Bonham attributed it to his close ties to the area.

“It felt like a fit, since I live in the community”.

He also noted that while “being in a big school is a challenge, I’m willing to embrace it and try to make a positive change“.

Bonham wants to make sure that his role is established within the school. This means, in his words, “my job as the principal isn’t to try to decide whether I think the policy is good or not, my job is to implement it [the policy]”.

He uses Freshman Seminar as an example, as the School Board dictates that schools must have the class and that his job is to make it as effective and beneficial for students as possible.

One of his main administrative tactics is to simply ask why. As he puts it, sometimes “you can’t see the forest for the trees,” meaning that sometimes the school and the administration will just go along with how things have previously been done and not find ways to innovate and contemplate if things are being done in the most effective way possible.

He does admit that this might not see an immediate payoff in Year 1, since a main part of his job now is just to observe what is going on and learn the processes of AHS, but it should be useful down the road.

“The first year when you come in as principal, you’re really just trying to learn how we do things. Now, I’ve been in enough schools where I know that procedure of most things, attendance, grades, all that kind of similar, every school is a little bit different, but really my job when I first came in was and continues to be is to listen.”

An area that he says he is trying to be especially cognizant of is the cause and effect between the decisions he makes. Bonham wants anyone that his policies negatively affect to seek him out and try to find a solution that works better for them. One thing in particular he wants to do is be able to send out information to students directly and communicate better with them, which he says should help further his relationship with AHS’ student body.

“One thing I started doing the last couple years at Western is I would send emails out to parents all the time, but I realized that parents aren’t always giving that information to their kids… so some of it is thinking about how I can change so I can communicate better to the student body.”

This extra attention to detail hopes to come into play when it comes to AHS’ seniors and their graduation readiness. Acknowledging the administration’s goal of a 100% graduation rate, Bonham laid it out clearly:

“There’s four years of work that goes into making this happen. and right now we have to work very hard on our seniors, who are in somewhat of a hole when it comes of SOLs, which are usually what does it [hold someone back from graduating].

He said that the administration is trying to help not only the seniors,, but also working with the freshman class to make sure that the problem can be eliminated from the ground up. “Each year, we try to get better, which for this year means focusing on the bookends (Ninth and 12th grades).”

All of these desires contribute towards achieving what Bonham is the most excited about for this year: Getting to experience the students of AHS to pursue their passions.

“It’s awesome to see energy in the building… I know Albemarle has tons of spirit with ‘A-Town’  and also just being part of a unique, diverse community.”

However, the whole student body is probably wondering, given his background at the other county schools (especially the most recent one), who he’ll be pulling for on Oct. 25, the date of the AHS vs WAHS football game. He put it simply: “Patriots all the way…  At the end of the day, when you cut my finger I bleed red.”