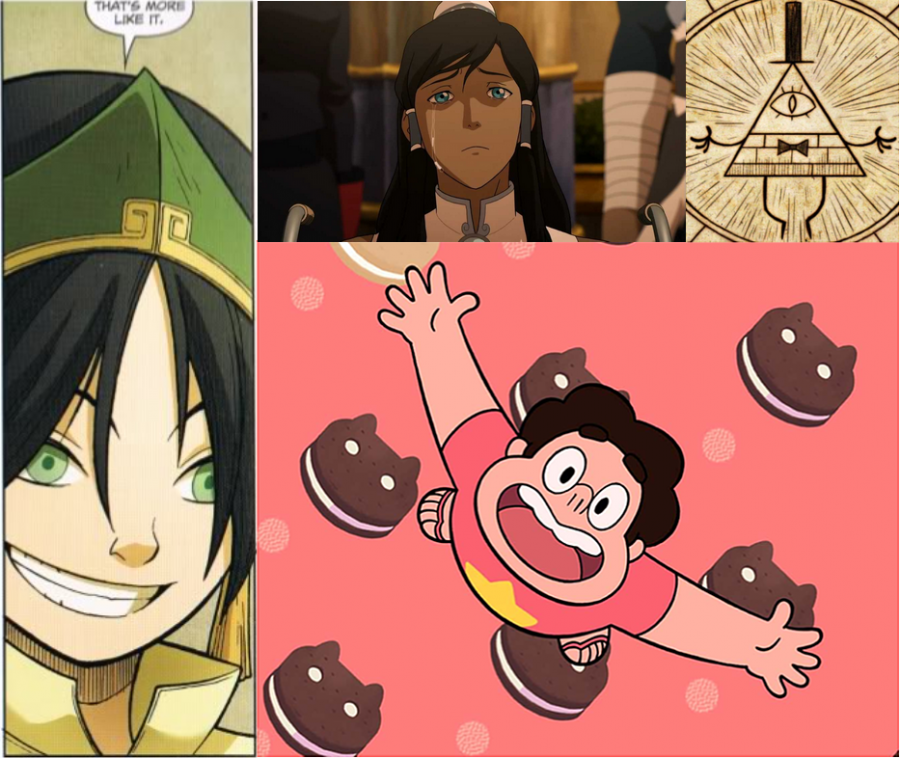 A senior in high school sits with his ten year old sister to talk about their favorite show together, and he finds himself arguing over the symbolism in a character’s favorite ice cream flavor. At no point does he question any of this– he’s certain he is part of the target audience for Steven Universe. He’s probably correct.

Are children’s shows evolving to tackle more real-world issues and thus gaining an older audience? Has this been a change for the better in the industry?

Avatar: The Last Airbender and Gravity Falls, programs aired on the same channel as Spongebob and Teen Titans, teach teenagers and adults about mental disorders and grief. They make jokes about the illuminati and pedophilia.

Gravity Falls’s fanbase outgrew middle school when the writer, Alex Hirsch, included jokes like a book about puberty titled, “Why Am I Sweaty?” and implying that a candy was laced with drugs. In November, Hirsch pranked the majority of his older fanbase by creating a fake spoiler and purposely leaking it online.

Legend of Korra no longer aired on live tv near the series’ end because its viewers were almost entirely adults and teenagers. Episodes were then uploaded weekly until the finale, which featured the canonical pairing of Korra and Asami, two bisexual women.

Both Steven Universe and Legend of Korra have main characters with mood disorders and some with physical disabilities. Korra, for the majority of the third season, had depression and was unable to fight. Steven’s guardians all show signs of PTSD after the death of a loved one.

Many say the new fans are beneficial to the industry as shows are critiqued with a new perspective. Characters are complex and grow as the show progresses, casts are diverse and conflicts are gripping. Animation is a technique rather than a genre.

The representation of marginalized or invisible groups has also shown itself in recent serieses. The majority of Steven Universe’s cast and characters is composed of women of color. Legend of Korra almost never aired because of a female, non-white protagonist. Adventure Time’s BMO is a genderfluid robot who fluctuates between both genders.

Disabled characters have shown up multiple times as major characters in the Avatar: The Last Airbender franchise, including the blind bandit, Toph Beifong, whose character arc centers around her living with her disability.

“People see me and think I’m weak,” she said in the episode ‘The Chase.’ “They wanna take care of me, but I can take care of myself, by myself.”

The show avoids the cliched conflict about ‘overcoming’ a disability and instead has Toph grow strong and fearless while being blind. She is never thought of as lesser because of her disability.

If minorities are given representation in cartoons, it could mean children grow up without biases towards said groups. Children stop seeing people of color or disabled people as alien, rather they see them as people.

Not to mention the kids who grow up as minorities and have never seen themselves represented in media before these programs. Little girls could dream about becoming super-heros, disabled children would feel accepted, and non-white children would know they have value.

The new standards for cartoons are making headway for the growth of the animation industry and social equality in the newest cartoon-driven generation.