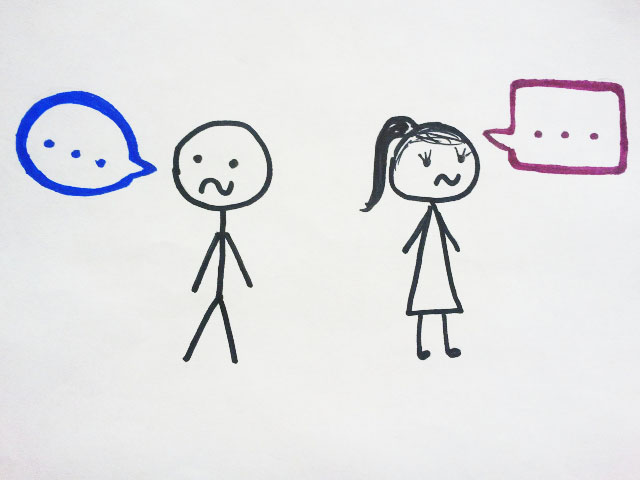 The image above depicts a simplified example of uncomfortable social interaction between opposite sexes.

You walk away from the cute, senior boy shaking your head because you have just brutally embarrassed yourself in front of him by making a joke about ovulation or by telling him your favorite subject is Lunch. Wipe away your tears, sweet, socially awkward misfit, you are not alone.

Between adjusting from middle school to high school, making friends in your new classes, joining clubs and trying out for sports or extracurricular activities, you have probably found yourself in a number of uncomfortable situations in which you have to interact with other humans.

I am by no means an expert on human interaction, in fact, I’m probably quite the opposite—but I have managed to make it through this social abyss we call “high school” with small talk and “High School Musical” references.

The scariest of all social interactions are often the ones with seniors, especially mature seniors. If you find yourself in an awkward conversation with a senior, do not make a fart joke. This is not an icebreaker—this will make them realize that there is a large age gap between you and them. It is best to slowly inch away from them until they forget they’re talking to you and they will eventually walk away sort of bewildered.

If you make a fart joke around boys, they won’t really care either way. They will probably ignore you. Boys aren’t that bad as long as you pretend you don’t hear their sexual jokes and “Family Guy” references. You just chuckle politely at their jokes, whether or not you understand them. Sometimes they will talk about interesting things like books they have read or their insightful movie reviews. They can really get going if you insult Megan Fox—they love to defend her honor.

Most of Albemarle’s female attendees have been blessed with naturally silky blow-outs, which only compliment their sparkling white teeth and Eddie Bauer bubble vests, making conversations with them unavoidably intimidating. If you see a girl wearing duck boots and looking good in them, do not talk to her, she is undoubtedly cooler than you.

Other girls are fair game, but if you begin to feel uncomfortable, bring up Francesca’s or how sexy Channing Tatum is, because that will always result in a lengthy conversation about how it’s unbelievable that he hasn’t been in more films based off of Nicholas Sparks books.

If you slip up by accidentally mentioning how sexy Anton Yelchin is or that you think that the Twilight soundtrack was actually better than the movie itself, the girls here are so kind-hearted, they’ll simply nod and laugh and give you time to correct your slip-up.

Avoid casual interactions with teachers altogether (Ms. Sherrill not included) because you will probably cuss in front of them or make jokes about crack, and neither of those things go over well with your adolescent advisors.

On the other hand, guidance counselors are super cool. On occasion, they have interrupted me while I’m in the midst of my frequent boy rants, offering advice or making jokes about how all boys are terrible people and will do nothing but break your heart, which is… cute.

The best advice I can give to anyone is to be yourself, but in moderation. Do not make potty jokes, drug references and do not quote movies other than “Mean Girls,” and people will flock to you like a crowd of tweens to a Justin Beiber concert.