Jake thinks Brady’s streak will continue while Grayson thinks the Falcons will prevail. Who is right? 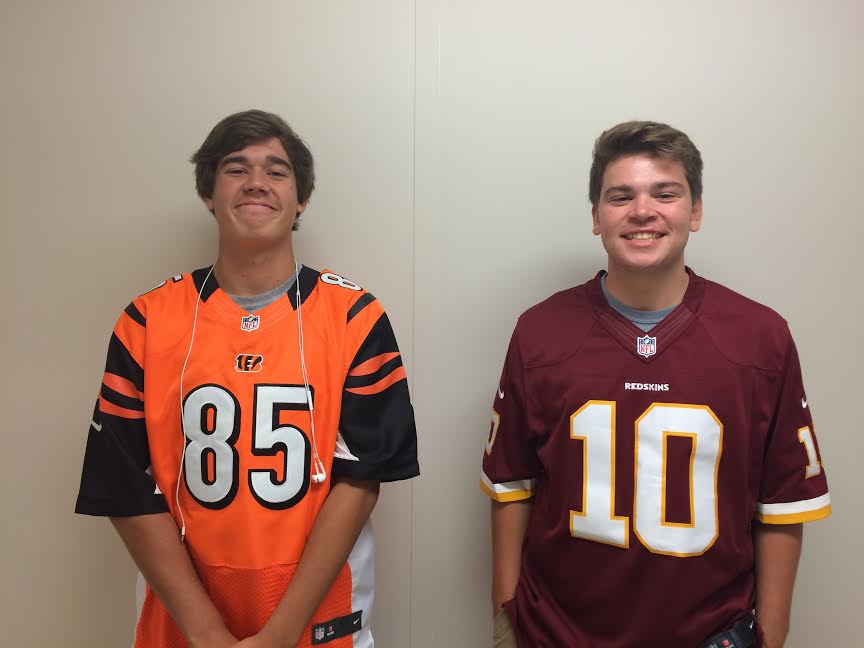 Jake: This is an incredibly intriguing matchup. I’ll start off with the Falcons. There are two major keys for the Falcons. Tom Brady has been beat in the Super Bowl twice by the same team, the New York Giants. How did the Giants win those games? Pass-rush, being able to move the ball with their best offensive weapons taken away by Belichick’s scheme, and, yes, a little bit of luck. The Falcons are going to have to rattle Tom Brady if they want any chance of winning this game. This is just another game for Brady, as it is his seventh Super Bowl.  Falcons quarterback Matt Ryan is playing in his first. Vic Beasley is the X-Factor for me, he led the NFL in sacks this season with 15.5. If he is able to get to Brady once or twice early– history has shown Brady does not like to get hit.

On the offensive side of things, the Falcons are going to have to score without Julio Jones. Plain and simple, Belichick and his Patriots are notorious for taking your best weapon and shutting him down. Even in their two Super Bowl loses, they did it to the Giants. In 2007 they held star wideout Plaxico Burress to two receptions; one of them happened to be the game-winning touchdown. In 2011 they held Pro-Bowl slot receiver Victor Cruz to four receptions for 25 yards and a touchdown. So, for the Falcons guys like Mohamed Sanu, Taylor Gabriel, Tevin Coleman, and Devonta Freeman are going to have to step-up and make plays for Matt Ryan. If they start dropping balls and Julio can’t get open from the bracket coverage that is sure to come his way, this Falcons offense will sputter and ultimately fail.

Lastly, the big question for the Falcons is: can they force coverage sacks with no Desmond Trufant, who they have made due without for the most of the season? Guys like Jalen Collins and Robert Alford will face their toughest task of the season on Sunday. Julian Edelman is the hardest receiver in the NFL to stick with. He’s low to the ground and gets in and out of cuts so quickly. Rookie safety Keanu Neal will more than likely be tasked with man to man coverage of Martellus Bennett, the big, physical tight end. Neal is a Defensive Rookie of The Year candidate, and for good reason. Former Seahawks defensive coordinator (Who is now the Falcons head coach) was looking for a Kam Chancellor-type player and he got one in Neal.

Moving on to the Patriots side of things, the big question is whether or not they will be able to take star wideout Julio Jones out of the game as they have done in the past. If Julio is kept under 100 yards, things will bode well for the Patriots defensively. The Pats enter allowing the second fewest rushing yards per game. If they can keep Tevin Coleman and Devonta Freeman under 150 scrimmage yards combined, as well as Julio under 100, I don’t see any possibility the Falcons win this game.

It’s all on this offensive line for New England. The Falcons’ defensive line wreaked havoc on the the Packers’ offensive line, which, according to Pro Football Focus, was ranked in the top five in the league. New England had the tenth best. If guys like Vic Beasley, and Brooks Reed can force pressure on Brady, that’s when things will begin to get problematic for the Pats. Tom Brady is a fantastic quarterback. There is no debating that; in my opinion, he is second best all-time. However, we have seen how he plays when he is being pressured, and it’s not good.

This will be a great game, no doubt. I’m not expecting a blowout in any fashion. I think Julio Jones will be kept under 100 yards. Expect a statline of six receptions for 66 yards. The good news for the Falcons is I don’t see Devonta Freeman and Tevin Coleman being shut down. I would look for at least 100 scrimmage yards from both of them. I expect Taylor Gabriel to take a wide receiver screen to the end zone early, followed by a Devonta Freeman touchdown run to put Atlanta up 14-0 early. That lead won’t last very long as Brady will rattle off 21 unanswered points to put New England up 21-17 as Atlanta will add a field goal. Matt Ryan will then lead his Falcons down the field and deliver a touchdown pass to Tevin Coleman out of the backfield. Atlanta will then go for the two point-conversion and get it to put them up 25-21. However, they will have left too much time for Brady. With just under three minutes remaining, Brady will do what he’s done his entire career: Fourth. Quarter. Comeback. Tom will march his team down the field, and find Julian Edelman in the end zone with just over 20 seconds left to play. New England will lead 28-25, after a failed lateral play, the New England Patriots will be crowned Super Bowl Champions. MVP will come down between Julian Edelman who will finish with 10 receptions, 110 yards, and the game-winning touchdown, and Tom Brady who will finish with 348 yards passing, four touchdowns, and one interception. Ultimately it will be Brady who gets it. Not only will he win MVP, but he will win my vote for the greatest quarterback in NFL history.

Grayson: These two teams were my picks to make the super bowl after the Raiders lost Derek Carr. I’m not saying I could see this coming, but, other than Green Bay, I couldn’t see anybody knocking these teams out of the post season. The Falcons enter with one of the most exhilarating offenses from every standpoint; on the flip side, you have the steady Patriots. They have been great all year and, even with the loss of Gronk, we all knew that they would still make it far. Sure enough, here we are. The Patriots defense has been playing lights out and, so far, the team with the best chance to beat them during the playoffs was the Houston Texans with their stout defense, and even they fell short.

Now, regarding players individually, I see this game falling in the hands of four men on each team. First off: Tom Brady. If it wasn’t for the success of Joe Montana in the Super Bowls, Tom would already have the title of greatest quarterback ever, but this game stands in his way. With this win, Tom could retire on top, similar to Peyton Manning last year, or could continue to add to his ever-growing legacy. Continuing with the impact players for the Patriots: Chris Hogan. The deep ball specialist was great for the Pats last week, and, with the attention given to the Patriots’ backfield along with Julian Edelman, Hogan has a chance to sneak behind the defense and torch opposing secondaries for the second week in a row. The last two for the Patriots are both on the defensive side of the ball: Logan Ryan and Malcolm Butler. Ryan, leading the team in tackles is going to have to take down some of the fastest and most elusive offensive playmakers in the game on Sunday if they want a chance to win. Malcolm Butler will most surely be covering Falcons star wide receiver Julio Jones all night, and his play will be the most crucial part of an attempt to deafen the high powered Falcons offense.

Now onto the Falcons. The most crucial part of this game, in my eyes, will actually be Mohamed Sanu. Overshadowed by star wide out Julio Jones, Sanu had an incredible game last week– snagging five catches for fifty two yards and a touchdown to go along with one rush for a seven yard touchdown. Julio Jones will have a good game, guaranteed. I’m sure the Patriots would be happy with holding him under eighty yards; however, Jones can’t win the game on his own and that’s where Sanu will come in. With all the attention being drawn by Jones, Sanu has an opportunity to have a nice game.

The other three keys to the game for the Falcons are the usual suspects: Matt Ryan, Devonta Freeman and Vic Beasley. Matt Ryan is playing in his first ever Super Bowl and is one of the last few elite quarterbacks in the league right now without a ring. If Ryan is smart with the ball and can limit turnovers while finding the open man, the Falcons will have enough on offense to at least force the Patriots to make the game a shootout. Ryan has a cannon for an arm and the best receiver in football, Julio Jones. Needless to say, Ryan is more than capable of stretching the field which he will try and do early against the Patriots secondary. It’s hard to think that Devonta Freeman was fighting for his spot earlier in the season, but that is only because of the fantastic backup the Falcons have, Tevin Coleman. Devonta is a hard runner and excellent pass catching back, ever elusive and with great speed. One of the most underrated running backs in the NFL, Freeman will have a chance to prove himself on the biggest stage in football.

Finally, on the defensive side of the ball, my guess for defensive player of the year, Vic Beasley. Beasley enters Sunday’s game with a whopping 15.5 sacks to go along with six forced fumbles and 39 tackles.  The best player that Tom Brady will face, Beasley needs to have a great game against a hard-to-cover New England team that is set on finding the open man and being patient.

At the end of the day, I think this Atlanta offense is something special and Matt Ryan will soon have his Super Bowl ring. I don’t think that this will hurt Tom Brady’s legacy. I still predict him having a good game, but the Patriots will fall short on the defensive side of the ball. People don’t understand how good this Atlanta team is, and Sunday night, when it’s all said and done, I think that Julio Jones and Matty Ice will be hoisting the Lombardi Trophy and bringing it back to Atlanta.

Who will win Super Bowl 51?