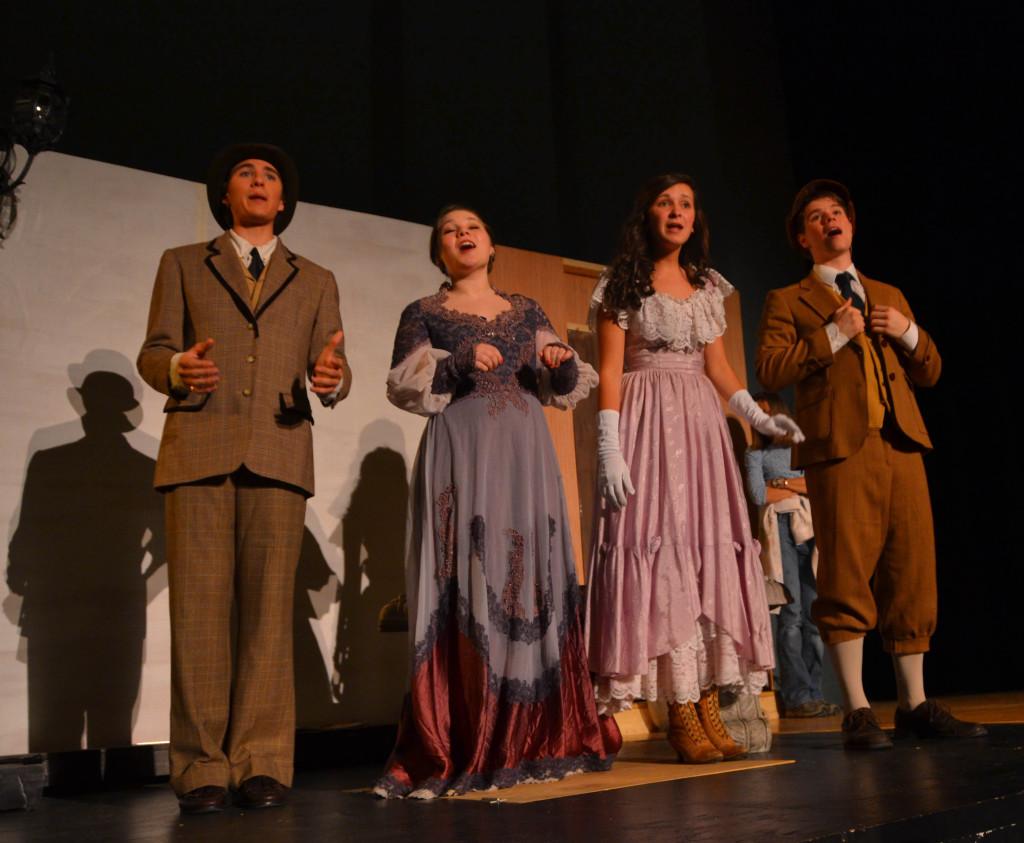 The cast rehearses the song “Elegance” for the musical, showing May 2-5. Sophomore Aaron Hoffman and seniors Christina Ramsey, Anna Goodrich and Ben Merrel have been preparing since February.

With 92 students involved in the cast and crew of the show, 200 hours of rehearsal, and $5,000 spent on hats alone, Albemarle High School Players come back with a bang in this year’s spring play: a rendition of the 1964 musical “Hello, Dolly!”

After receiving a Tony for Best Musical in 1964, the musical reached the height of its popularity when a live action version was filmed in 1969 with Barbra Streisand playing the lead role of Dolly Levi.

The story takes place in the 1890’s in Yonkers, New York. Dolly travels to Yonkers to meet Horace Vandergelder, a rich, 40-something bachelor that owns a Hay & Feed store. Dolly, a successful matchmaker, intends to marry Horace herself, but first takes him to New York City “to meet an heiress that might be interested in him.” The clerks of Vandergelder’s Hay & Feed store promptly, but secretly, follow Horace on his way to New York, in hopes of spending all their money and kissing a girl in the big city. “It’s about mishaps, mismatches, disguises,” director of the show Fay Cunningham said, “But with all the hilarity, and all the silliness, there is this poignant meaning that everyone wants to be loved, and everybody wants somebody.”

Each character strives to find romance, and find themselves dancing and singing their way there. “’Hello, Dolly!’ has not been done in this area for quite some time,“ Cunningham said, “I thought it would be really good to give everyone something new and different.”

This year’s musical shows a shift in its overall impression—where “Hello, Dolly!” is fun and care-free, Albemarle’s most recent plays such as “Phantom of the Opera,” “Man of La Mancha,” and “Fiddler on the Roof,” had more prominent themes of morbidity and suffering. “It’s such a fun, upbeat musical, which is different than what [Albemarle] has done in the past few years,” said senior Christina Ramsey.

Cheerful and extensive dance numbers compliment the light-heartedness of the musical.  Ramsey, along with junior Hannah Williams, helped Cunningham choreograph several of the big dance numbers throughout the play. Ramsey and Williams play the lead roles of Irene Malloy and Ermengarde.

“This show is special because it has a very unique cast that is going to put on an amazing performance,” senior Anna Goodrich said. Goodrich has participated in all of Albemarle’s spring musicals since 2010. “I love being able to be part of something that is always so amazing.”

The show is heavily choreographed, with about 15 musical numbers. “This has been the most dance-heavy musical that Albemarle has done in a long time, and I love dancing, so it’s so much fun for me!” Williams said.

The waiters in the renowned “Hello Dolly” number have the greatest amount of choreography to handle, but Williams said “They make it look beautiful. I feel like a proud mother hen—my little chickies dancing like pros.”

With five-hour rehearsals four days a week, it gives the cast plenty of time to perfect the choreography. Rehearsals often last until 10pm or later, which gives the cast lots of quality time together. They often go on dinner runs to Cook Out or Raising Cane’s, coming back just in time for the three hours of rehearsal that comes after their one hour dinner breaks. “The cast gets along really, really well,” said Goodrich, “I have formed some wonderful friendships with people in this cast.”

Even though “Hello, Dolly!” is Williams first show, she said “I feel so welcomed and loved. We get along so well, and I look forward to rehearsal each day.”

Albemarle Players’ career took off in 2008 when the public was taken aback by their tear-jerking performance in “Les Miserables,” and the crowds returned in 2009 for “West Side Story,” and in 2010 for “Beauty & The Beast.” In 2011, “Phantom of the Opera” won “Best Local Play/Musical” by the C’ville Weekly Readers Poll, and again in 2012 for Albemarle’s adaption of  “Fiddler on the Roof.”

“There’s something that’s special about being in and doing shows here. Part of it is the immense talent and skills of the students of Albemarle—they’re ready to tackle anything.”