Marching Their Way to Success: Band Puts in Long Hours in Order to “Party on the Other Side” 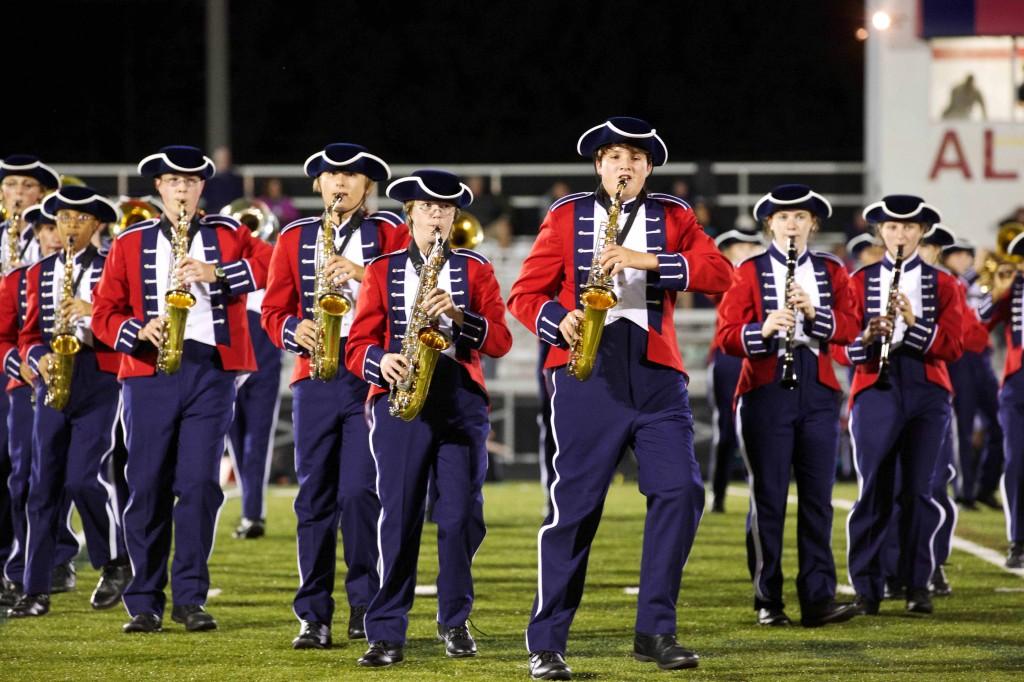 It’s nine AM on a sweltering summer morning and the Albemarle marching band is already preparing for the upcoming season. While most teens would be sound asleep, these guys are carrying 15-pound instruments around a football field.

This routine will continue for the remainder of summer and into the school year.

“Once marching band hits we practice for ten hours a day for two weeks, so that’s about 60 hours a week for two weeks. By the time school starts we are already about 120 hours into it,” band director Greg Thomas said.

Marching band consists of about 100 students and with practices almost every day, these students have become more like family.

“We are a close knit family,” sophomore Scarlett Jackson stated. “My favorite part would have to be the feeling after completing your first run through the entire show. It’s this feeling when Mr. Thomas says, ‘okay, now run the show,’ and halfway through you realize you can look around while you’re marching and see everything flow together. It feels like a passionate fire burning in your core, and you just have to feed it.”

Practices are all in preparation for the many activities that marching band compete in; competitions, parades, and halftime shows at home football games.

The marching patriots took home the grand prize at their first competition, the Jefferson Invitational, with superior ratings in every category.

At the competition, the marching band performed their  Day of the Dead themed routine called “Party on the Other Side.” The routine consists of three songs; Ghost Dances, Nueva Los Huesos (Shake Your Bones), and Runaway Baby. The routine builds on itself throughout the year. The complete routine will be shown at the final home football game, on Nov. 1.

“I wanted to do a show that had a latin-jazz flavor to it, and some of that music seemed to fit this theme pretty thoroughly,” Thomas said. “We wanted to have more of a party show this year. But a party is more interesting if there is a dark side to it.”

This year’s routine requires talent and teamwork which come from hours of practice and commitment.

“We had two music rehearsals during the summer, and they were about three hours apiece, and that is when we hammer out the rough stuff and the details, but besides that we take our music home, look at four or five measures at a time, and just memorize it. We take small chunks at a time,” Jackson said.

To accomplish all of the songs and movements that come along with them, members are given a Drill Book to memorize. There are many different ways members can memorize their songs.

“Repetition,” sophomore Josh Oliver said. “As Mr.Thomas always says, ‘Repetition is your mom,’ he means it as it is the most important thing you can do, the more reps the better.”

With the complexity of these drill books comes the memorization and hard work of remembering where you need to be and when you need to get there.

“Each member of the band has an individual dot in the form (which are the different shapes and designs we create) that they have to memorize, which is a lot of work,” senior drum major Jessica Davis said.

With about 100 students, Thomas chose two students to help him lead the marching band. These students, called drum majors, must show leadership, determination, and hard work in order to get the job. Drum majors help Mr. Thomas in any way shape and form possible. Also, they lead the pep band throughout the football games along with conducting the halftime show.

“We lead pep band, which is when we play the shorter songs for the crowd, and then when it gets to half time we conduct our show,” senior drum major Grace Dalton said. “After that we then move in front of the student section and conduct more pep band sometimes even with the help of spirited students from the student section.”

Students join marching band for more than just a chance to play their instrument. They join for friends, fun, and even pancakes.

“ I came to Albemarle for MESA so I didn’t know anyone, and I heard it was a good way to meet people,” sophomore Emmet Haden said.

“In eighth grade we were told after every home game we get pancakes,” Jackson explained. “The real thing is I had never seen something so intricate before. It’s basically an athletic art, and it’s so beautiful. Being able to physically and musically express an entire story is just so alluring.”

“I wanted to join marching band because it is such an amazing community. Going into high school freshman year can be really scary, but by the start of the year I already knew 90 people and had a place where I really belonged,” Davis said.

Also, marching band is often continued as a family dynasty, whether the cycle is passed along through your siblings or your parents.

“Both my parents were in marching band in high school and one of my good friends told me about how much fun he had the past marching season,” Oliver said.

“My brother was in the marching band before I got to high school. I went to all of his competitions and thought it was really cool, but I wasn’t going to do it my first year because I knew how much work it is and I didn’t know if I would be able to do it all. When my friend Rachel found this out, she forced me to do it, although I have no regrets,” Dalton said.

The marching band will perform at the next home football game, Homecoming, on Oct. 18 and then they will perform their full routine on Nov. 1.

Marching Their Way to Success: Band Puts in Long Hours in Order to “Party on the Other Side”