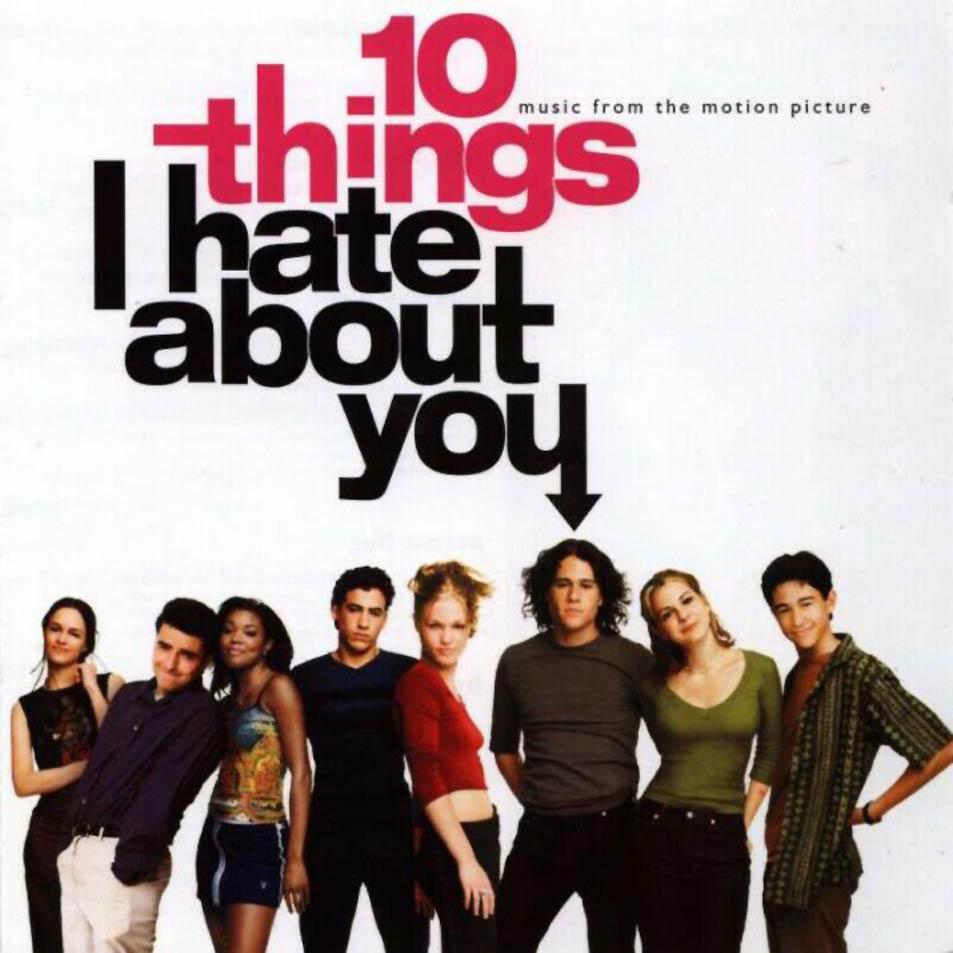 “10 Things I Hate About You” is a 90’s classic with a great soundtrack and lots of Heath Ledger, deeming it one of cinema’s best achievements yet.

“Oh, wow. Original, Julia. Are you a 90’s kid? Do you just love the 90’s?” you say to yourself in a mocking tone because who actually likes the 90’s? Who actually appreciates that culture?

My sweet reader, I appreciate that culture, and I love the 1990’s but only because they are hilarious and I have a lot of ironic respect for them as should everyone. I do not love the 90’s because of Rugrats or because I think Everclear is totally slammin’.

We all vaguely remember parts of the 90’s—TV shows mostly—watching “Friends” and the ladies of The View while our mothers folded our laundry, maybe even listened to a little *NSync, if our parents thought they were hip by being into that.

However, we can’t really label ourselves “90’s kids” because although we were born in the mid-to-late 90’s, we really had developed no individual taste at such young ages.

Fortunately for me, my role model as a child was my super punk babysitter–a fashionable and gorgeous teenager–that was all about the 90’s. She wore her hair in a bun with two strands framing either side of her face, with black clips holding back the fly-aways of her choppy layers. She wore crop tops and band tees underneath her distressed jean jackets.

I had forgotten about my incredible admiration for my babysitter until about a year ago when the “90’s kid” trend began to reappear. My infatuation with the 90’s slowly began to resurface.

I began with the basics: Winona Ryder films. Talented, weirdly gorgeous and the epitome of the 90’s, Winona encapsulated the decade perfectly. Her pixie cut and her black turtlenecks were iconic to the decade itself. But even sweet Winona could be a little too deep for me, so I reverted to what I know best—shallow chick flicks.

And that leads me to what I consider to be one of the greatest films of the 90’s: “10 Things I Hate About You.” Those of you that have seen this 90 minutes of pure gold are most likely nodding your heads in agreement and possibly crying salty tears of love, but for those of you that are throwing your heads back in disgust, rolling your eyes, groaning etc., let me just inform you that a) we can never be friends and b) Heath Ledger sings. And he is good. He sings Frankie Valli’s “Can’t Take My Eyes Off of You” to Julia Stiles which is totally gross and she is completely not worthy of it, but that’s irrelevant. This isn’t like joker Heath Ledger singing; this is like 20-year-old tan, muscular, Australian accent Heath Ledger playing a bad-boy.

A second favorite 90’s chick flick of mine is “Clueless,” which literally everyone in the world seems to love, and rightly so. This movie even has Paul Rudd. Like a nerdy, young Paul Rudd that’s not really that attractive, but I’m not really into Paul Rudd, anyway.

One of the most important parts of a movie is the soundtrack. The “10 Things I Hate About You” soundtrack is absolutely stellar. Semisonic, The Cardigans, weird girl pop bands doing covers of late 70’s classics—all of it equally terrible and wonderful at the same time.

Clueless holds it own with Radiohead and other stuff that I’m not into even for the sake of making fun of it, but there are several songs that are incredibly catchy and I’ve probably listened to more times than I’ve heard “Hey, Soul Sister.”

Undoubtedly, the best part of the 1990’s was its distinct style.

To this day, no one really knows what happened. It was kind of like the sewing machine exploded because people kept trying to sew chains on their pants and the sewing machine was like “what are you doing, please stop” and eventually the sewing machine went on strike so people had to revert to cutting their clothes and wearing things that were obviously way too small or way too big for them.

Turtlenecks, grunge, cargo pants, camouflage, probably every fashion faux pas you can possibly think of was not only evident in the 90’s, but popular. Here is my diagnosis: during the 90’s everyone was rushing around trying to find a stereotype to attach to their decade but they felt as if everything had already been taken—hippie, pin-up girl, preppy, whatever the 80’s was—they were all associated with a decade. Therefore, everyone in the fashion industry during the 90’s was like “What are we supposed to do?” and they answered their question by blending every single stereotype together and adding studs.

It was actually very inconsiderate of the 90’s to be so care-free and revolutionary in it’s stylistic choices, because the 2000’s were hit with the aftershock pretty hard. Everyone tried to grow out their platinum blonde pixie cuts because the world had come to the conclusion that that was a really bad move, leaving the general population with very visible roots and an atrocious over-usage of bejeweled hair clips.

90’s fashion reminds me of high school in a lot of ways. Upon our arrival to this educational menagerie we politely call “high school,” we search wildly for our identity. We hop on every stereotype that comes our way, hoping that maybe this will be the persona that takes us home. This frantic hunt for our place in society leaves us tired, confused and angsty. Similarly, in the 90’s, everyone was like “what are we doing? There is no definite societal structure here, no trends I can follow. This is anarchy!” which is how a lot of students feel about high school.

But what the 90’s found was that with no basis for what was socially acceptable, everyone could be entirely themselves and do whatever they wanted.

We should learn from this! We should eliminate all other societal expectations and focus on our interests alone. Wear ugly things if you like them, listen to bad rap if you want to, admit that your favorite show is “Jeopardy!” without fear of being mocked incessantly by your peers, because you most certainly will be.

This is what the 90’s was all about—being completely yourself and disregarding the opinions of everyone else. So in an attempt to find its identity, the 90’s found itself completely on the outskirts of the societal norm and ended up greatly enjoying itself there; similar to the kids that go to Homecoming and hover around the border of the dance floor, throwing M&M’s down the dresses of girls in inappropriate attire. These are the kids who have the most fun and also end up not being pregnant.

In summation, the 90’s are like a self-conscious, air-headed group of misfits that all banded together and made their mark on a time that would be looked back on fondly by many, laughed at by some, and despised by others. Kind of like high school.